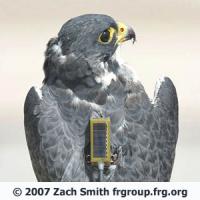 September 30, 2009
In September, a streamlined Peregrine Falcon calls as it wings its way south from its Arctic nesting grounds. The pale gray falcon will spend the winter in Chile. On its back, it wears a miniature satellite transmitter, attached there by members of the Falcon Research Group. In 2006, Bud