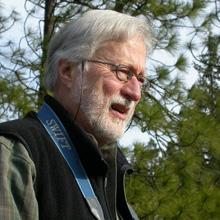 Tom is a retired biologist who received his PhD from the University of California and then spent two years as a post-doc at the University of Washington. His research efforts during those two years focused on the avian circadian rhythms and migratory behavior. Tom has worked as a teacher and a research scientist and manager for locally based community public health programs, HIV/AIDS surveillance projects, and for a global clinical research program conducting clinical trials of HIV prevention strategies at the Fred Hutchinson Cancer Research Center. Tom is a board member emeritus of Audubon Washington and served as member of the volunteer leadership team for the Woodland Park Zoo. His free time is spent hiking, fishing, birding, cooking, and traveling.

I affiliated with BirdNote because it strives to convert listeners from lukewarm to active conservationists. We reach close to 2 million people, many of whom, according to listener surveys, were not avid conservationists until they began listening! Now they better understand, now they get involved, now they recycle, now they strive to further shrink their carbon footprint, and now they support environmental causes. Those are reasons enough.