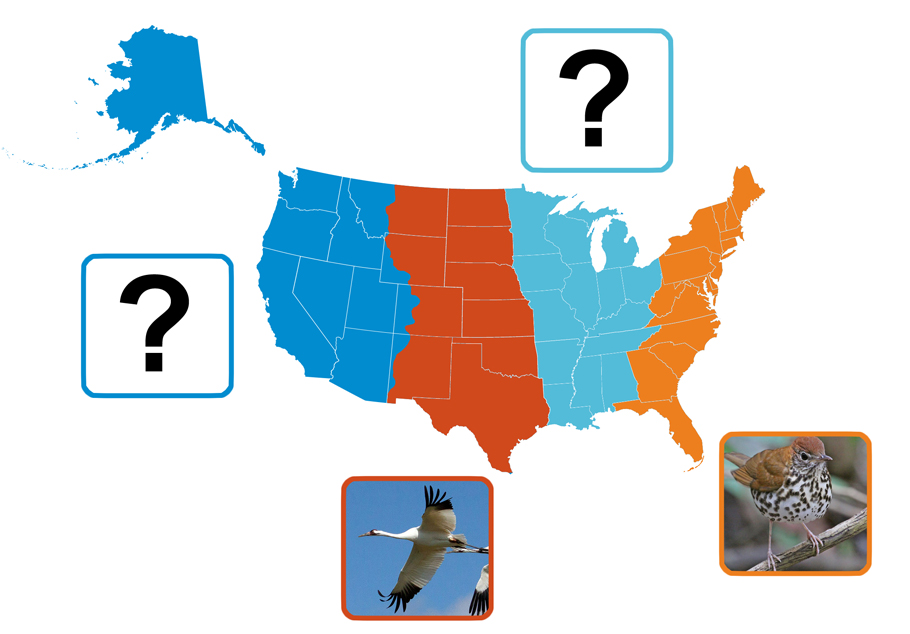 Every Tuesday during the month of December, BirdNote is highlighting beloved birds and places in each of the four North American flyways – the Atlantic, Mississippi, Central and Pacific – and asking for your support.

Today, in our second installment, we bring you a species that literally stands out in the Central Flyway: the Whooping Crane! Standing at nearly 4.5 feet, the Whooping Crane is the tallest bird in North America. While still endangered, this species is a true conservation success story, having come back from the brink of extinction.

The largest population of Whooping Cranes migrates entirely within the Central Flyway, from breeding grounds in far northern Alberta - nearly a 1,000-mile drive from the U.S. border - to a wintering range along the Texas coast.

In 1941, only 16 Whooping Cranes in this population remained. Thanks to an effort to protect the Wood Bison in north-central Canada, the land surrounding the last breeding territory of the Whooping Crane was simultaneously preserved 30 years before crane nests were discovered there.

A decades-long recovery effort by public, private, and non-profit entities in the U.S. and Canada has involved both captive breeding and habitat protection. Today, the wild population of Whooping Cranes numbers more than 400.

Please help BirdNote spread the word about the lives and needs of Whooping Cranes and other birds, in your flyway and beyond.

Check out these extraordinary places to enjoy birds