The Most Gorgeous Bird in North America

“Do you hear that bird singing high in the tree?” I asked my wife. “The one that sounds like a robin with a sore throat?” By May, after the oaks have leafed out in the deep forests of the East, the best way to spot the most gorgeous bird in North America is to listen for it.

Once I located the singer, I waited for the male Scarlet Tanager to flit to another branch. When it landed in full sunlight, my wife looked through my binoculars to marvel at the molten crimson feathers set off by black wings. Could there be any bird with a more immaculate plumage?

I put this question in a slightly different fashion to several top ornithologists: Can you list the top ten most attractive birds in the U.S.? The result: the Scarlet Tanager was the runaway winner. (Only the male has the bright scarlet; the female, illustrated here with the male, is a greenish-yellow). Yet surprisingly, eight of the 16 top-ranked species (there were several ties) are birds you might also see here on a spring day: Baltimore Oriole, Prothonotary Warbler, Wood Duck, and Northern Cardinal, to name a few. My hypothesis was that you could stack these beauties up against anything the Serengeti, the Amazon, or the highlands of New Guinea had to offer, and our birds would hold their own in aesthetic appeal.

When it comes to birds, beauty is in the eye of the beholder. One early spring, I took a group of visiting British ornithologists to the Great Falls of the Potomac to show them some American birds. They had traveled all over wild Africa and Asia but had never been birding in the U.S. Toward the end of our walk, we came upon a Northern Cardinal, a Blue Jay, and a Pileated Woodpecker, in the span of a few feet. The Brits stood transfixed, ignoring subtle hints to keep moving through the biting cold, all on account of three of our more common birds. One famous birder once noted that if you took our Blue Jay and stuck it on top of some mountain in Mexico, and that single peak was the entire extent of the bird's range in the wild, amateur ornithologists would make a pilgrimage by the thousands, in order to see one of the most magnificent birds on the planet. But because it's in nearly everyone's back yard and is far from shy, we ignore it, unlike the Scarlet Tanager hiding in the canopy, the stunner of spring. 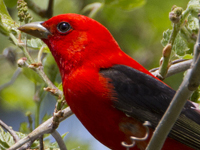 Adapted from an article that originally ran in The Village News.

Scarlet Tanager - More at All About Birds