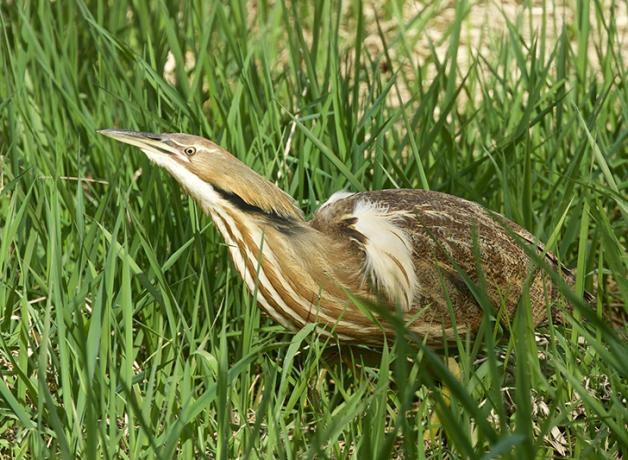 American Bitterns nest in marshes across the northern half of the United States and throughout much of Canada, and they winter along both US coasts south into Central America. But in some places, bitterns are in serious trouble. Much of the extensive, shallow marshland they once bred in has been drained or degraded by chemicals and silt.

You’re listening to one of the most peculiar and memorable of all North American bird voices. This bird’s deep, resonant calls have earned it nicknames like the “thunder-pumper” and the “stake-driver.”

It’s an American Bittern. This tall, slender member of the heron family is incredibly well camouflaged with beige-and-brown vertical stripes. And when it stretches its neck and points its beak toward the sky, it blends in with the dense marshes where it spends most of its time.

In the Old Testament, bitterns were associated with evil and desolation, perhaps because their eerie calls reminded people of the dank bogs. But we now know wetlands are places of incredible diversity and filled with life.

Bitterns nest in wetlands throughout much of Canada, and they winter along both US coasts south into Central America. But in some places bitterns are in serious trouble. Much of the shallow marshland they rely on has been drained for development or polluted with chemicals and silt.

Expansive and healthy freshwater marshes are crucial to the bitterns’ continued welfare — and to a natural world that includes their remarkable voices.

They first pump up their esophagus to balloon size and then use that air for the second part of their call. Often you can hear both parts distinctively in calls.

American Bittern - More at All About BirdsLearn more about wetland restoration at StateOfTheBirds.org 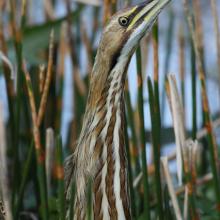 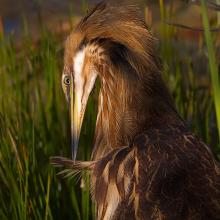 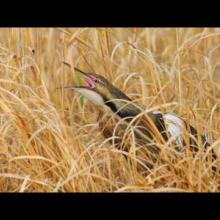 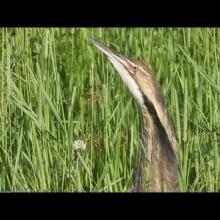