The Aqua Tower - Architecture with Birds in Mind 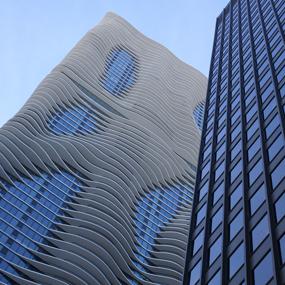 The glass and lights of skyscrapers in downtown Chicago pose danger to hundreds of thousands of migratory birds. But the 82-story Aqua Tower is a beacon of a different sort: one for architects embracing bird-friendly design. Compared to some of its neighbors, the Aqua Tower is safer for birds because its undulating, wave-like balconies and fritted glass break the reflections that confuse birds and invite collisions.

The Aqua Tower - Architecture with Birds in Mind
With Jeanne Gang

[Sounds of the city at night]

The glass and lights of skyscrapers in downtown Chicago pose danger to hundreds of thousands of birds migrating at night along the shores of Lake Michigan. The 82-story Aqua Tower, however, with its undulating, wave-like balconies, is a beacon of a different sort: one for architects seeking to address bird-safety. Architect Jeanne [gee-knee] Gang and her team at Studio Gang incorporated non-reflective surfaces and fritted glass into their design of the Tower.

Here’s Jeanne to say why:

“I grew up really loving nature and natural environments, but I wasn’t particularly a birder…and I learned that buildings are one of the biggest mortality factors for birds in the U.S.  As an architect, I didn’t want to be one of the biggest killers of birds! I just learned what I could from the experts and applied it, and then you know what! My love of birds has just flourished since then…”

Jeanne also sees architecture moving toward more bird-safe design through building codes and new ordinances, such as those in San Francisco.

“I came into it from a different way, really learning about the problem first and then meeting people that helped turn me on to all the different amazing birds that come through the city twice a year through migration and that really struck me as such an amazing event to take part in and observe.”

You can learn more and see photos at birdnote.org