The Auklet's Whiskers - Not Just for Show 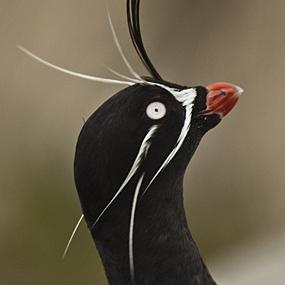 In Alaska’s Aleutian Islands, thousands of Whiskered Auklets — miniature relatives of puffins and murres — nest in deep rock crevices. The birds owe their name to the white plumes that sprout from their heads each summer. These fancy “whiskers” likely play a role in courtship. But they're not just for show. Much like the whiskers of a cat, the plumes are acutely sensitive, guiding the auklets through the dark nest cavities. When nesting is done, the auklets will return to the open sea and molt their multi-purpose whiskers. Until the next spring.

At dusk, in the far western reaches of Alaska’s Aleutian chain of islands, thousands of tiny Whiskered Auklets fly in to nest in cavities deep in rock crevices. [Whiskered Auklet calls, http://macaulaylibrary.org/audio/133048, 0.11-.13, repeated]

Whiskered Auklets are miniature relatives of puffins and murres. Charcoal gray, they're about eight inches long and owe their name to the long, slender white plumes that sprout from their heads each summer. Two rows down the side of the face and a third set that stands like antennae above their eyes. These fancy white plumes very likely play a visual role in courtship and mate selection. But they're not just for show. [Whiskered Auklet calls, http://macaulaylibrary.org/audio/133048, 0.11-.13, repeated]

The auklets’ “whiskers” have an important sensory function, too. When the birds enter their cliff-side nest cavities, they find themselves in utter darkness. The “whiskers” enable the auklets to feel their way along in the dark. Much like the whiskers of a cat, they're acutely sensitive. [Whiskered Auklet calls, http://macaulaylibrary.org/audio/133048]

By summer’s end, when nesting is done, Whiskered Auklets return to life on the open sea, like many seabirds. And with no dark crevices to navigate and no mates to impress, they molt their multi-purpose whiskers.