How Gray-crowned Rosy-Finches spend the winter 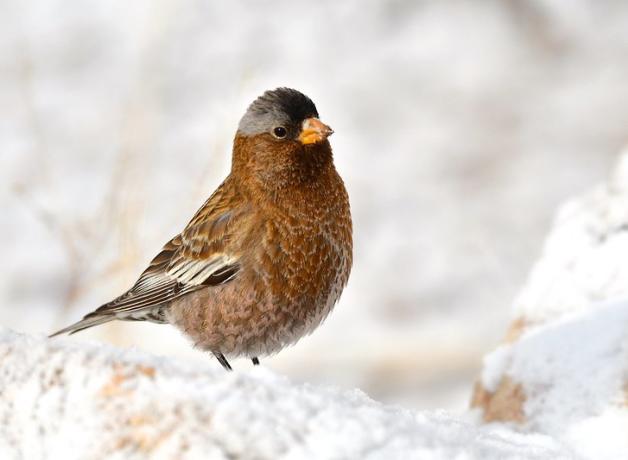 BirdNote gives you the sounds of birds everyday. And you get the sights as well when you follow us on Instagram. @BirdNoteRadio

This is BirdNote!
It is late afternoon on a winter day along Washington’s Coulee Lakes. Towering basalt faces glow ochre-brown in the slanting light of the low sun. Waterfowl crowd the lakes, but few birds perch along the stony barricades. A Golden Eagle watches from atop the cliff as a Common Raven glides by, its call reverberating off the rock face.
[Common Raven calling]
As the sun sinks lower, a flock of hundreds of songbirds suddenly appears, an undulating cloud that swarms into the upper levels of the rimrock.
[Rosy-Finches calling]
They are Gray-crowned Rosy-Finches, coming to roost for the night in an extensive colony of abandoned Cliff Swallow nests. The nests, neatly constructed mud jugs with slender openings, offer shelter from freezing nighttime temperatures. Gray-crowned Rosy-Finches nest high in the mountains in summer, and roam the countryside in large flocks in winter, in search of weed seeds and waste grain. These veterans of the cold mountains appreciate the snug night-roost of a Cliff Swallow’s nest, left behind like a time-share condo by the swallows now warming themselves in Mexico.
Once again, the calls of Gray-crowned Rosy-Finches….
[Calls of Gray-crowned Rosy-Finches]
BirdNote gives you the sounds of birds everyday. And you get the sights as well when you follow us on Instagram. At BirdNoteRadio.
###
Calls of the birds provided by The Macaulay Library of Natural Sounds at the Cornell Lab of Ornithology, Ithaca, New York. Common Raven recorded by R.S. Little; Gray-crowned Rosy-Finch by “Old PWFG.”
Producer: John Kessler
Executive Producer: Chris Peterson
© 2014 Tune In to Nature.org      November 2016     Narrator: Michael Stein