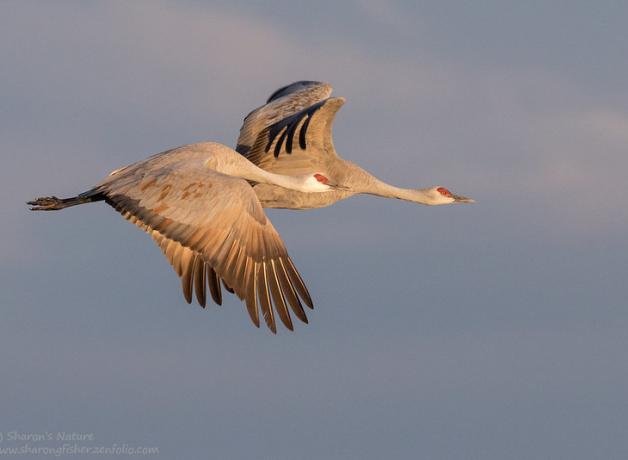 We asked David Yarnold, President of National Audubon, why bird conservation matters. He says that preserving wild places and preserving the links in nature's chains allow wildlife to thrive. Where birds thrive, you're going to have clean water and clean air, and that's good for kids, and it's good for birds. The sound that especially moved him was that of Sandhill Cranes. Picture the sun coming up over the Platte River in Nebraska, and the sound of the cranes, lifting off in waves... Learn more about Audubon and their work at Audubon.org.

Birds and Bird Conservation Matter
An Interview with David Yarnold, President of Audubon

This is BirdNote!
[Calls of Sandhill Cranes]
We like to know what leaders value. Here, David Yarnold, president of Audubon, describes being deeply moved by birds:
“I was in Kearney, Nebraska to watch the Sandhill Cranes and when they took off at dawn, … twenty thousand of them, and it was just deafening…. You know, the juveniles with their high-pitched screeches, it just made the hair on my arms stand up!”
And on the Atlantic Flyway, south of Charleston, there’s a small barrier island called Deveaux Bank… [Calls of Brown Pelicans, Sandwich terns]
“…it’s home to about 5,000 pairs of breeding Brown Pelicans, and I had the chance …to take my wife and daughter out there – and there were oystercatchers …and terns and the pelicans and … they just filled the air and it was one of those moments when you know…you’re in some other creature’s place on earth! Very magical place to be.”
We asked David why bird conservation matters.
“…I know that where birds thrive, you’re going to have clean water and clean air, and that’s …good for kids, it’s good for birds, so conservation to me is a core principle about how to live my life.”
BirdNote celebrates the work of conservation organizations such as Audubon to protect birds and the environment we share — today, and for future generations.
For BirdNote, I’m Michael Stein.
[Calls of Sandhill Cranes – thousands]
###
Bird sounds provided by The Macaulay Library of Natural Sounds at the Cornell Lab of Ornithology, Ithaca, New York.  Calls of thousands of Sandhill Cranes recorded by A.A.Allen; calls of Sandwich Terns [138114] recorded by J.H. Berry; Brown Pelican juveniles [38322] T.A. Parker.
Adult Brown Pelicans recorded by Martyn Stewart of naturesound.org
Producer: John Kessler
Executive Producer Emeritus: Chris Peterson
Executive Producer: Sallie Bodie
Editor: Ashley Ahearn
Associate Producer: Ellen Blackstone
Assistant Producer: Mark Bramhill
© 2014-2019 BirdNote         December 2014 2019    Narrator: Michael Stein
ID# yarnoldd-01-2011-12-13      yarnoldd-01b

More about bird conservation at Audubon.orgBird Life International: Why we need birds (far more than they need us) Sandhill Cranes - More at All About Birds