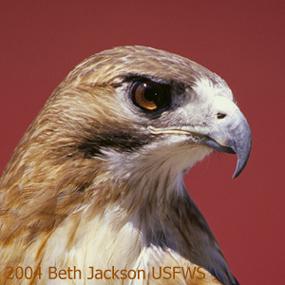 From its lofty outlook, this Red-tailed Hawk commands "a bird's eye view." The Oxford English Dictionary defines that as "a view of a landscape from above, such as is presented to the eye of a bird." Debate continues about birds' visual acuity, but we do know that visual acuity is keenest among birds like flycatchers and hawks, which must pick out small or distant moving objects. Birds' eyes are about three times sharper than those of humans. Learn more at StanfordBirds.

Get advance notice of BirdNote shows with Weekly Preview email.

This is BirdNote!
[Red-tailed Hawk scream, repeated]
As a Red-tailed Hawk soars high above the earth, its searing call pierces the air. [Red-tailed Hawk scream]
From its lofty outlook, the hawk commands what idiom calls “a bird’s eye view.”
[Music runs throughout. *]
The Oxford English Dictionary dates the phrase back to the 1760s, and defines it as “a view of a landscape from above, such as is presented to the eye of a bird.”
Just how well does a bird see? Scientists have found great variation among the eyes of different birds. And debate continues about birds’ visual acuity, that is, about the sharpness of their vision.
But we do know that visual acuity is keenest among birds like flycatchers and hawks, which must pick out very small or distant moving objects. One often-repeated speculation had hawks’ vision as eight times more acute than humans’. This is now known to be an exaggeration – their eyes are more likely three times sharper than ours.
But just imagine seeing three times as well as you do now! Such visual ability would be nothing short of brilliant. And the vision of hawks remains, as one expert writes, “probably the most highly developed eyesight that exists.”
[Red-tailed Hawk scream]
Would you like to receive stunning photos each week of the birds we’ll feature in the week ahead? If so, come to birdnote.org and sign up on the link entitled “Weekly Preview.” I'm Frank Corrado.
###