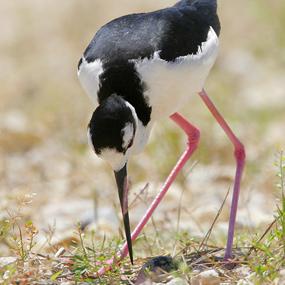 Visit a shallow wetland in summer, and you might see this slender, black-and-white shorebird with outrageous red legs. The Black-necked Stilt uses its long legs for wading as it feeds on tiny insects and crustaceans on the surface of the water. Stilts are sensitive to drought, which has increased with global climate change. But they readily move to new breeding areas and respond quickly when new wetlands are created.

BirdNote®
The Bird with Outrageous Legs
Written by Dennis Paulson

Visit a shallow wetland in summer, and you may be dive-bombed by a slender black and white shorebird with outrageous red legs. The appropriately named Black-necked Stilt has the longest legs relative to its size of any North American bird. It uses those legs for wading, as it picks tiny insects and crustaceans from the water surface with its long, slender bill. [Black-necked Stilt calls]

If the stilt continues to pester you, you must be near its nest. These birds signal the approach of any potential predator. They leap into the air and call with an intensity and volume all out of proportion to their delicate appearance. The persistent calling signals that the predator has been seen and often sends it on its way. Thus, the stilt’s noise and activity benefit all the birds in the vicinity. [Black-necked Stilt]

Because of this, Black-necked Stilts are called sentinel birds. When avocets, which breed in the same habitats, add their voices to the clamor, you can understand why no sensible predator would stick around. [American Avocet calls]

Birds of shallow wetlands, stilts are very sensitive to drought, which has increased with global climate change. But they readily move to new breeding areas, responding quickly when new wetlands are created. [Wetland + calls of Black-necked Stilt]

To see a photograph of those outrageous red legs and learn what’s being done to conserve wetlands, come to our website, birdnote.org.

Black-necked Stilt — More at the Audubon Guide to North American BirdsListen to another BirdNote show about sentinel birdsLearn about the North American Wetlands Conservation ActHow are wetlands doing now? — Check out the State of the Birds 2017 report Check out international wetland conservation efforts — From BirdLife Internatio…You can help protect wetlands! — From the Environmental Protection AgencyBlack-necked Stilt — More at All About Birds 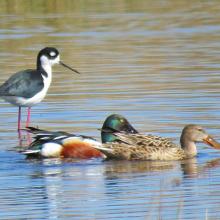 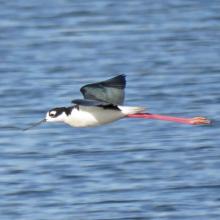 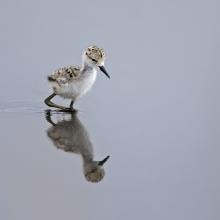 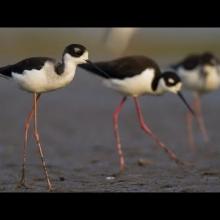