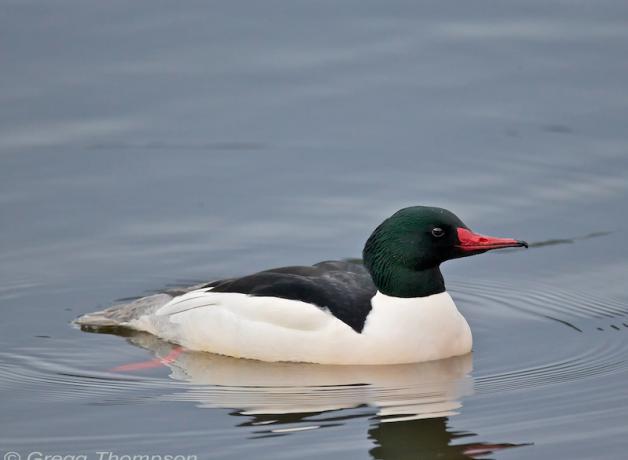 Around this time of year, Common Mergansers cross the US-Canadian border on their way to wintering grounds in the Lower 48. But how do they know when to go? Ducks are well insulated against frigid winter temperatures, but mergansers can find their fishy prey only by diving below the surface of open water. So they’re doing just fine, resting and feeding in southern Canada, until a thin veneer of ice forms on their lake, signaling the time has arrived to head south!

Around this time of year, Common Mergansers are flying south from Canada to wintering grounds in the Lower 48.

What dictates when they decide to go? [Wintry sounds]

These ducks, like most birds, are well insulated against frigid winter temperatures. But they do have to find food, and they only can find their fishy prey by diving below the surface in open bodies of water.

So they're doing just fine, resting and feeding in southern Canada, until they wake up one November morning and a thin veneer of ice is forming on their lake. That ice is a sign of the times — and enough to let the ducks know, they should be heading south. [Common Merganser calls, splashing]

This makes Common Mergansers and some other diving ducks among the last of the migrants to appear in the US in late fall. In years to come, if they start to arrive later, it may be a sign that changes in climate are shaping their migratory behavior. Read the latest reports of the Intergovernmental Panel on Climate Change to see why those mergansers may not be coming south in the future. [Wind]

Did you know BirdNote delivers the wonder and joy of birds directly to your inbox? Sign up for our newsletter at BirdNote dot org to get a weekly preview of our shows, stories, photos, and more. 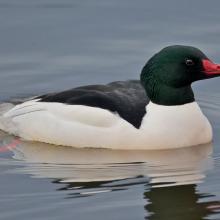 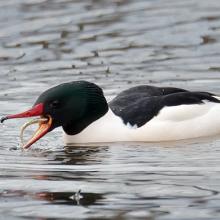 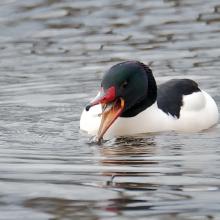 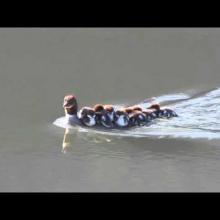 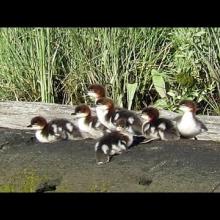