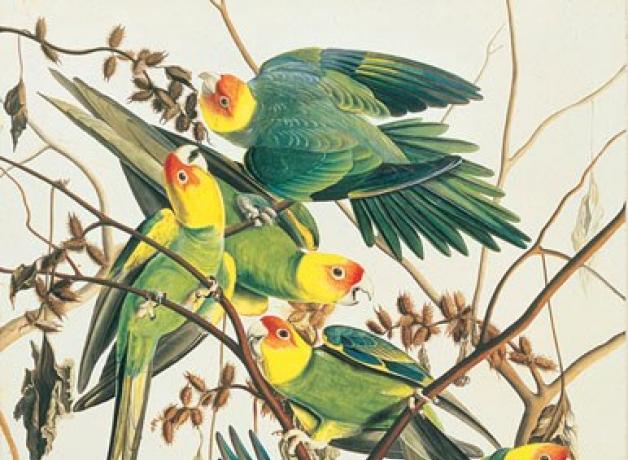 How did Theodore Roosevelt develop his interest in birds? The chain of events may surprise you. As a budding birdwatcher, Roosevelt was influenced by John Bell, a New York City taxidermist. It turns out that Bell started watching birds 50 years earlier on a trip up the Missouri River with John James Audubon. And Audubon’s interest in birds – including these Carolina Parakeets, now extinct – had been piqued in France, at the end of the 18th century, when he met the famous natural historian Charles d’Orbigny. A line, connecting mentor to mentor.

Genealogy is all the rage: Who doesn’t want to know more about their ancestors — to hang a new leaf on a tree that bristles with presidents and noblemen and heroes?

But blood is only one way to measure descent. There are also more abstract lines, lines that connect all the people who’ve influenced the ways we think and live — and watch birds.  [Dawn chorus + music]

His actual family was exalted enough, but as a budding birdwatcher he was influenced more by adults like a New York City taxidermist by the name of John Bell. [Dawn chorus + music]

Bell in turn had his start fifty years earlier on a trip up the Missouri River with none other than John James Audubon. And Audubon’s interest in birds had been piqued in France, at the end of the eighteenth century, when he met the famous natural historian Charles d’Orbigny. [Music]

A line through time, from mentor to mentor.