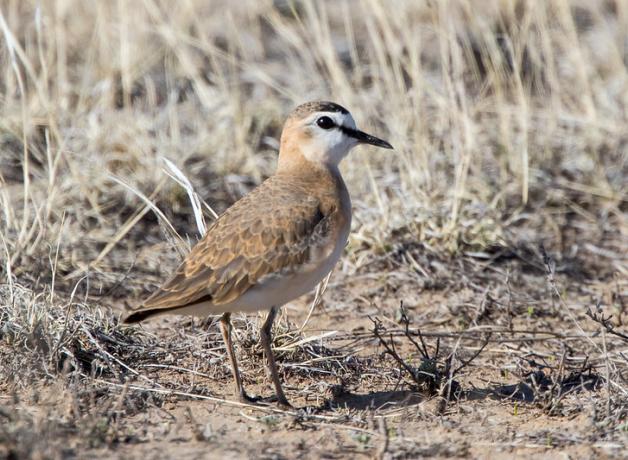 Some birds require habitats created by other animals. Two such landscape shapers were the American bison and the prairie dog. With the extermination of millions of bison and prairie dogs, species such as this Mountain Plover and the Burrowing Owl, which require barren ground, greatly declined. The American Prairie Foundation is restoring prairie, removing fences and reintroducing bison. Prairie dog colonies are expanding. We can restore both birds and some of "America's Serengeti!"  Learn more about this work at Americanprairie.org.

This is BirdNote!
[Sound of prairie wind and bison snort]
Some birds require habitats created by other animals.
[Prairie dog whistles]
Two such landscape shapers were the American bison and the prairie dog. For thousands of years, these animals generated a mosaic of vegetation on the Great Plains, ranging from nearly bare earth in bison wallows and prairie dog towns, to lightly grazed tall grasslands. Each benefited particular species of birds. With the extermination of millions of bison and prairie dogs, species such as Burrowing Owls that require barren ground greatly declined.
[Call of Burrowing Owl]
The cattle that replaced the bison and prairie dogs are also “ecosystem engineers.” But cattle, constrained by fences, graze nearly all areas quite heavily. Birds adapted to this degree of grazing live sustainably with cattle. But birds which prefer ungrazed or lightly grazed vegetation, have become rare, such as Chestnut-collared Longspurs.
[Song of Chestnut-collared Longspur]
The American Prairie Foundation is restoring a rich and varied prairie in northeastern Montana. They’re removing fences and reintroducing bison to lands they’ve not occupied for more than a century. Prairie dog colonies are also expanding.
Ecosystems are resilient. By working with natural processes and employing the services of nature’s ecosystem engineers, we can restore both birds and some of the lost grandeur of America’s Serengeti!
[Sound of prairie + wind]
There’s more to this story at birdnote.org.
###
Sounds provided by The Macaulay Library of Natural Sounds at the Cornell Lab of Ornithology, Ithaca, New York. American bison recorded by G.F. Budney; Prairie Dogs by S. Benson-Amram; Call of Burrowing Owl by G.A. Keller; Song of Chestnut-collard Longspur by G.A. Keller.  [Did not use song of Sprague’s Pipit and song of Baird’s Sparrow but would be good for future ref.]
Producer: John Kessler
Executive Producer: Chris Peterson
© 2014 Tune In to Nature.org       February 2017/2020  Narrator: Michael Stein 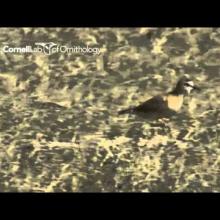