Meet some of Belize’s amazing birds of prey! 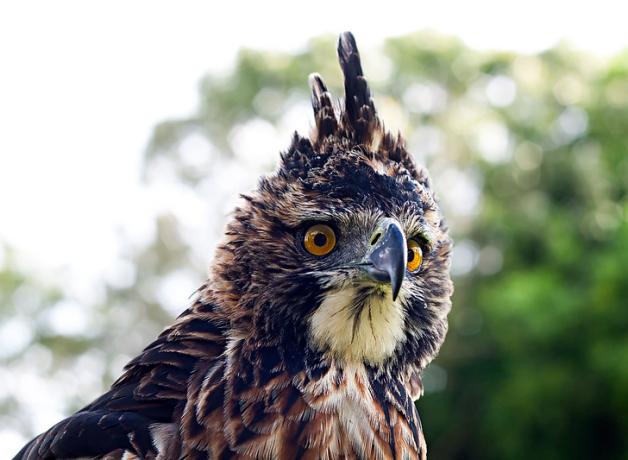 Long, upward slopes called escarpments offer a good chance of seeing some of the many raptor species found in Belize. Shaped like a compact Red-tailed Hawk, White Hawks are white overall with black markings and scan the landscape for reptile prey. Bat Falcons have a darkly barred chest and cinnamon belly, and chase down swifts, dragonflies, and the bats that give them their name. Ornate Hawk-Eagles stand over two feet tall and are capable of catching monkeys.

In northwestern Belize a long, upward slope leads to a clearing at the edge of an escarpment. This rocky outcropping offers a sweeping view of the tropical forest below. As the morning sun causes warm air to rise, a pair of White Hawks soars into view, the male calling.

In flight, a White Hawk is shaped like a compact Red-tailed Hawk. Sparkling white overall with black markings, its plumage is striking for a hawk. The pair scans below for reptile prey.

A diminutive, dark falcon — a Bat Falcon — swoops in, alighting on a bare branch.

Its blue-black head is patterned like a Peregrine Falcon’s. The white upper breast contrasts with a darkly barred chest and cinnamon belly. This 10-inch falcon hunts on the wing, chasing down swifts, dragonflies, and the bats that give it its name.

Now a rhythmic cry draws attention to a large raptor — an Ornate Hawk-Eagle — perched at the forest edge with a Spider Monkey in its talons. More than two feet tall, the hawk-eagle’s head and neck are handsomely patterned in black, white and rust below a tall black crest. Its underparts are finely barred in black and white.

It’s still morning. What splendid raptor might show up next?