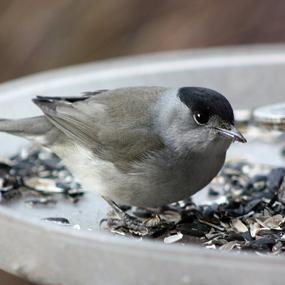 Nature is evolving constantly. Dr. Mike Webster of the Cornell Lab of Ornithology describes an example of rapid evolution and adaptation from the world of birds. He says the European Blackcap, a species of warbler, used to breed in Germany during the summer and migrate to Spain in the winter. But about 20 or 30 years ago, some Blackcaps started going to England, where warmer temperatures and bird feeders awaited. Today, these birds are “genetically programmed” to migrate to England!

[Song of a Blackcap]

Nature is evolving constantly around us. Dr. Mike Webster of the Cornell Lab of Ornithology describes an example of rapid evolution and adaptation from the world of birds.

“A beautiful example of rapid bird evolution that we see happening today is change in migratory routes.  A very nice study of European Blackcaps, which is an Old World warbler, has shown that in the past these birds would breed in Germany during the summer and then migrate down to Spain for the winter. But about 20 or 30 years ago, some of these Blackcaps started going to England, and found warm temperatures there due to climate change and a lot of bird feeders with food because the Brits were feeding their local birds. And so these Blackcaps started going there and over just the course of 20 or 30 years we’ve actually seen genetic change in the populations so that these birds are genetically programmed to migrate to England rather than to Spain. And their bills are changing shape as well, probably because they’re finding a very different food resource in England than they had in Spain, namely all those bird feeders.”

[Song of a Blackcap]

The survival of birds depends on their ability to adapt to a changing world. There’s more to this story at birdnote.org.

And here is link to a nice educational piece on the web that talks about this work: