Filming Rare Storks in Their Nests 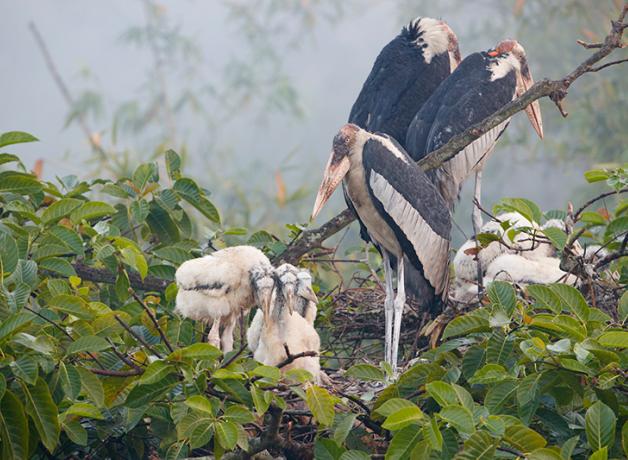 Photographer Gerrit Vyn traveled to northeastern India to document the daily life of the Greater Adjutant stork. These endangered birds nest high in trees on privately owned land in the state of Assam, where they’re known as Hargila. Conservation biologist Purnima Devi Barman helped Gerrit get a stork's-eye view by building a bamboo tower near the canopy of a Hargila nesting tree. Learn more in the documentary Hargila from the Cornell Lab of Ornithology.

Filming Rare Storks in Their Nests

Gerrit Vyn: [DX track 4:16] Before the breeding season began, Purnima arranged for the construction of a bamboo tower that would put me close to the canopy of a nesting tree. It was critical that I be in the right position to capture intimate moments in the family lives of these birds never filmed before.
[05:52] Directly above people’s homes, the scene looks prehistoric: the tree canopy enshrouded in fog, and five nests, coming to life, [6:10] each with hungry chicks and a parent that has guarded them through the long, cool night.

[06:31] When the sun rises and illuminates them, they’re both beautiful and bizarre. At close range, the one and a half meter tall adults are imposing: [06:50] long-legged, with a massive beak; bare skin vibrantly colored in red, orange and yellow; and a dangling, inflatable air pouch used in courtship displays. Their intense blue eyes appear knowing. They feel like more than a bird.

Learn more in a new documentary called Hargila produced by Gerrit Vyn and the Cornell Lab of Ornithology. Find a link on our website, BirdNote DOT org. I’m Mark Bramhill.