The Greatest Bird Rescue Ever 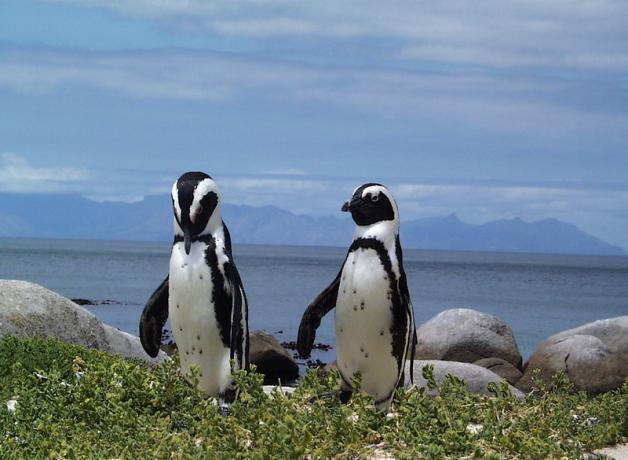 On June 23, 2000, the "MV Treasure" iron ore tanker sank off the coast of South Africa, covering 19,000 adult African Penguins in oil. Fortunately, thousands of volunteers arrived to help. The oily birds were moved to Cape Town to be cleaned. Another 19,500 penguins that escaped the oil were released at sea, 600 miles to the east. It took those birds nearly three weeks to swim back home, allowing workers time to clean up the oil-fouled waters and beaches.

The Greatest Bird Rescue Ever –

African Penguins and the 2000 Oil Spill

On June 23, 2000, an enormous iron ore tanker sank off the coast of South Africa, between Robben [RAH-bun] and Dassen [DASS-un] Islands.

[Sound of stormy seas and creaking of ship]

Fuel from the tanker covered 19,000 adult penguins in oil – right at the peak of their breeding season. Word of the birds’ predicament spread quickly. Tens of thousands of people arrived to volunteer their help. The oiled penguins were removed to an abandoned warehouse in Cape Town to be cleaned and cared for. Another 19,500 penguins that had so far escaped the oil were taken from Dassen Island and released at sea, over 600 miles to the east. [Splash of a boat plowing through the sea]

It took the penguins released at sea nearly three weeks to swim back home, allowing workers time to clean up the oil-fouled waters and beaches. The entire rescue effort lasted over three months, and saved more than 91% of the oiled penguins.

You can learn more about one of the greatest bird rescues ever — and about other bird conservation efforts – at our website, BirdNote.org. I’m Michael Stein.

Call of the African “Jackass” Penguin [904] provided by The Macaulay Library at the Cornell Lab of Ornithology, Ithaca, New York. Recorded by T. Smith.