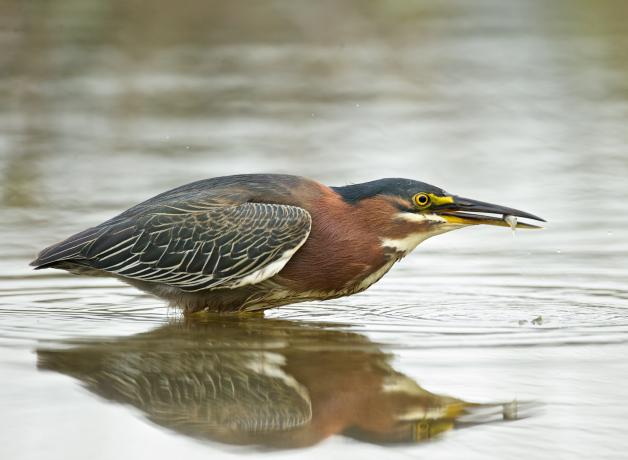 The Green Heron forages on the banks of small bodies of fresh water. Relying on its plumage for camouflage, it perches motionless — body horizontal and stretched forward — waiting for small fish to come close. This heron may use "bait" while hunting for fish. It drops a feather, a live insect, or a twig on the water's surface. Then it hunkers down and waits for unsuspecting prey to venture within reach. Clever heron! Be sure to watch videos of Green Herons fishing (below).

The heron you’re most likely to see in North America is the tall Great Blue Heron. But this stately bird has a much smaller and more secretive relative — the Green Heron.

This chunky, short-legged heron is about a foot and a half long, maybe about a third of the size of its larger cousin. And it’s a deep forest-green color, with a chestnut-colored neck.

The Green Heron forages for fish and small amphibians on the banks of small bodies of fresh water, using its plumage to camouflage itself amid the trees and shrubs. It perches, body horizontal and stretched forward over the water, still as a statue, waiting for small fish to come close.

[Sounds of pond and vocalizations]

Now, here’s the really cool part. This heron sometimes uses “bait” to lure its prey. It will break twigs into pieces small enough to make convincing lures and then cleverly drop them onto the water’s surface. Sometimes, instead of a stick, the heron will use a feather or even a live insect. Then the bird hunkers down and waits for an unsuspecting fish to swim close.

[Sounds of water and vocalizations]

The Great Blue Heron may be easier to see, but be sure to keep an eye out for the small — and clever — Green Heron. 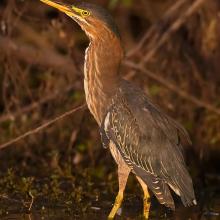 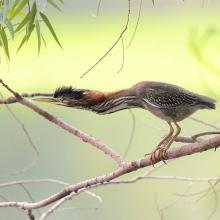 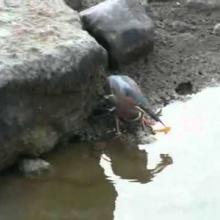