Hummingbirds at the Border 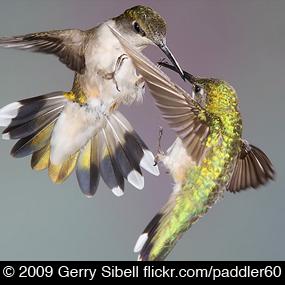 Thousands of hummingbirds - including these Ruby-throats - are now in southward migration. Hummingbirds that summer in the western US will arrive in the mountains of southern Arizona. (Ruby-throats take a more easterly route.) Countless hummingbird feeders provide continuous nectar in this hummingbird heaven. But with so many birds in competition, they fight constantly. Do raised levels of aggression alter the birds' physiology and survival? What about the native flowers that evolved to be pollinated by hummingbirds? So many questions...

Listeners and viewers support BirdNote. You, too, can make a gift. Thanks!

Hummingbirds at the Border

This is BirdNote.
[Though not much of a migrant, we used Anna’s wing whir because script calls for “relaxed” wing sounds and because samples of Rufous are RUHUs in display.]
Thousands of hummingbirds in the West are now in southward migration. One after another, they’ll arrive in the mountains of southern Arizona. With countless hummingbird feeders providing continuous nectar, this region could be called hummingbird heaven. [Chirping of Rufous Hummingbird] Every fall, bird lovers come from far and wide to enjoy the spectacle.
[The sounds of people and more Anna’s Hummingbird sounds]
But there’s more to the story. The presence of so many feeders has brought dramatic changes in recent times. Feeders provide food more concentrated than flowers, and with so many birds in competition, they fight constantly, even though there’s plenty of food for all.
[Wing whirs of Black-chinned Hummingbirds and call of Rufous]
Do these raised levels of aggression alter the birds’ physiology and survival? And what about the native flowers, both in Arizona and Mexico, that evolved to be pollinated by hummingbirds? Are fewer hummers visiting plants and flowers now because of all the feeders? We have surprisingly few answers to these questions and much to learn.
[More Black-chinned wing whirs]
BirdNote writers include Dennis Paulson, Ellen Blackstone, Todd Peterson, Frances Wood, and Bob Sundstrom. Adam Sedgley procures the sounds from the Cornell Lab of Ornithology. Our producer is John Kessler and our executive producer is Chris Peterson. BirdNote is supported by our listeners. Thank you.
[Chatter of Broad-billed Hummingbird]
###
Sounds of provided by The Macaulay Library of Natural Sounds at the Cornell Lab of Ornithology, Ithaca, New York. Wing sounds of Black-chinned Hummingbird 60121 recorded by W.W.H. Gunn; Broad-billed Hummingbird by C.A. Marantz; Rufous Hummingbird recorded by G.A. Keller; Anna’s Hummingbird by A.A. Allen
Producer: John Kessler
Executive Producer: Chris Peterson
© 2011 Tune In to Nature.org     September 2011   Narrator: Mary McCann

Check out Audubon's citizen-science project - Hummingbirds at Home!Hummingbirds - More from the Migratory Bird CenterRuby-throated Hummingbird - More at All About BIrdsSupport BirdNote