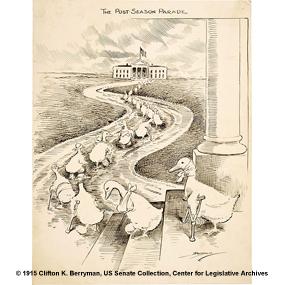 "Lame duck" is probably a very old term, from before there even was a Congress of the United States. In 1772, an Edinburgh newspaper reported that many people had gone broke in the London stock market (Exchange Alley), and that "Only one lame duck waddled out of the Alley." In 19th century America, it had come to describe an elected official who had not been re-elected and thus lacked political power. The 20th Amendment to the Constitution moved the beginning of the terms of Congress from March to January, shortening the "lame duck" period.

This is BirdNote!
[Congressman John Boehner, “And how any member can vote to adjourn and pump this into a lame duck session…is putting your election...”]
At the end of an election year, you hear a lot about the “lame-duck session” of Congress. “Lame duck?” What’s a bird have to do with politics?
Well, it turns out that this is probably a very old term, dating back to the time before there even was a Congress of the United States. [Sound of horse-drawn transportation] London’s Exchange Alley was the equivalent of our present-day Wall Street. In 1772, the “bulls” in the market suffered a particularly bad day and had to pay the “bears” a lot of money. But many of them couldn’t pay their debts. The next day, an Edinburgh newspaper reported that many people had gone broke and that “Only one lame duck waddled out of the Alley.” This fellow was clearly powerless and bankrupt. [Single (female) mallard quacking]
Somehow, the phrase turned up in 19th century America. By then, it had come to describe another unfortunate soul, an elected official who had not been re-elected and thus lacked political power. [Chatter of male mallards]
Lame-duck politicians could still cause a lot of trouble, though, precisely because they had no accountability to their constituents. The 20th Amendment to the Constitution eased that problem. It moved the beginning of the terms of U.S. senators and representatives from March to January.
There are still lame ducks. They just don’t linger as long.
[Madly quacking Mallard fading out…]
###
Calls of  Mallards provided by The Macaulay Library of Natural Sounds at the Cornell Lab of Ornithology, Ithaca, New York.  Chatter of males and loud quacking of female recorded by A.A. Allen.
Historical ambient from Kessler Productions.
Producer: John Kessler
Executive Producer: Chris Peterson
© 2013 Tune In to Nature.org     January 2013     Narrator:  Michael Stein

More about "lame duck" at Phrases.org