What kind of cloud is that? Better check the Cloud Atlas to be sure 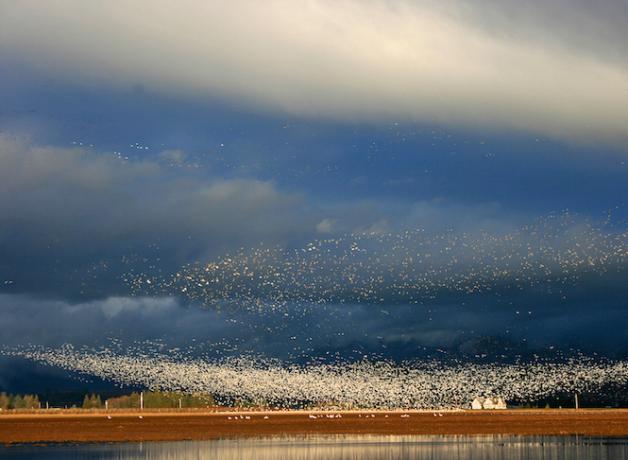 When we watch birds in flight, they’re often seen against a backdrop of clouds. Clouds have many different types and are listed in the International Cloud Atlas. The asperitas cloud was first described by citizen-scientists and has now been incorporated into the official atlas.

[Snow Geese. LNS# 3495 -- recordist Donald S. McChesney]
["Cloud Atlas Sextet for Orchestra" - Cloud Atlas Original Motion Picture Soundtrack - 2012 Watertower Music]
This is BirdNote.
When we watch birds, they’re often in flight.
Snow Geese.
A soaring Swainson’s Hawk.
[https://macaulaylibrary.org/asset/66356081 or https://macaulaylibrary.org/asset/54752421 ]
But behind the birds are often clouds of puffy white. Or wispy checkerboards. Or masses of lead and silver rolling headlong across the sky.
Sometimes the clouds themselves are so dramatic they pull on our attention as much as the creatures winging by.
Much like birds, clouds have been a subject of artistic reflection and scientific inquiry. And for more than 200 years, types of clouds have been organized in ways very similar to types of birds, to help watchers recognize and enjoy them.
2017 marked a key event in cloud-watching. After a decade of research and discussion, the scientists at the World Meteorological Organization added the asperitas (pron: uh-SPARE-uh-tahs) cloud to their International Cloud Atlas.
With the online atlas, you can quickly figure out if you’re watching those geese flying in front of a nimbus or a stratus — or maybe even the massive dark folds of the newly named volutus (pron: voh-LOO-tus) cloud.
Now you can make your cloud-watching even more like bird-watching.
Find a link on our website, Bird Note Dot Org.
I’m Michael Stein.
###
Bird sounds provided by The Macaulay Library of Natural Sounds at the Cornell Lab of Ornithology, Ithaca, New York. Recorded by WWH Gunn and J Holmes.
BirdNote’s theme music was composed and played by Nancy Rumbel and John Kessler.
Producer: John Kessler
Managing Producer: Jason Saul
Associate Producer: Ellen Blackstone
© 2018 Tune In to Nature.org   March 2018   Narrator: Michael Stein