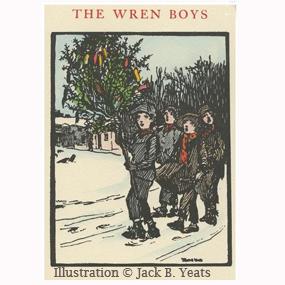 December 26th is known in the British Isles and elsewhere as Saint Stephen's Day, in honor of the first Christian martyr. Beginning in the 16th Century, local lads would go forth for a yearly wren hunt. The wren was protected the rest of the year, but the day after Christmas, the "Wren Boys" would catch a wren and parade it around town. The unfortunate "star" of that celebration - the Eurasian Wren - is a species closely related to the Winter Wren of the Eastern US and Pacific Wren in the Northwest.

The Myth of the Wren

This is BirdNote! [Early music from Baltimore Consort]

December 26th is known in the British Isles and elsewhere as St. Stephen’s Day, in honor of the first Christian martyr. Beginning in the Sixteenth Century, local lads would go forth on this day for a yearly wren hunt [Bells, shouts, and scrunching]

All the rest of the year, the wren was honored and protected. [Winter Wren song in the background] But on this day, the “Wren Boys” would catch a wren and parade it around town, seeking treats from the homes they visited, and offering a feather in return, for good luck. The Wren Boys’ ritual may have derived from the legend that it was a wren that woke St. Stephen’s captor and thus foiled Stephen’s escape. [Winter Wren] Or perhaps in an even older ritual, the wren represented the old year laid to rest, to make room for the new.

The “star” of that year-end celebration is the only wren that occurs in the Old World. That Eurasian Wren is closely related to the Winter Wren of the Eastern United States and the Pacific Wren of the Northwest. The songs of these birds are long and amazingly complex. [More Winter Wren]

Bird sounds for BirdNote are provided by The Macaulay Library at the Cornell Lab of Ornithology. I’m Michael Stein.

Call of the Winter Wren provided by The Macaulay Library of Natural Sounds at the Cornell Lab of Ornithology, Ithaca, New York. Recorded by G.A. Keller
Other sounds provided by Kessler Productions
Early music: Interlewd: Argeers from the album The Art of the Bawdy Song by The Baltimore Consort.
Producer: John Kessler
Executive Producer: Chris Peterson
© 2014 Tune In to Nature.org     December 2014     Narrator: Michael Stein