From Wisconsin to Florida - with an ultralight! 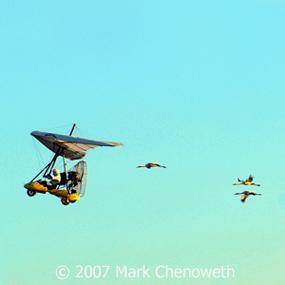 Unlike many other birds that have an inherent sense of direction and destination, young Whooping Cranes have to learn their migration route from the adults. Enter Operation Migration and ultralight aircraft to lead the eastern population of cranes on their journey from Wisconsin to Florida! Fortunately, the young cranes need to be shown the way only once. Follow the day-to-day migration report about this year's journey from Wisconsin to Florida and back on OperationMigration.org.

The project has now ended. Be sure to read Christopher Joyce's account.

This is BirdNote!
[Sounds of Whooping Cranes]
The Whooping Crane is one of the most endangered birds in North America. The only flock of Whooping Cranes breeding in the wild migrates between Canada and Texas. To ensure the future of the species, biologists want to establish another wild population that will winter in Florida and breed in Wisconsin.
Unlike many other birds that have an inherent sense of direction and destination, Whooping Cranes have to learn their migration route. But there are not yet enough adults raising young and showing them the way. Enter Operation Migration and ultralight aircraft. [Sounds of an ultralight]
Young cranes, hatched in captivity, hear the sounds of an ultralight’s engine mixed with the brood calls of adult Whooping Cranes. [Sounds of cranes and ultralight]
Pilots, shrouded in white, carry crane puppets and fly the ultralights that will lead the birds on migration. The trainers basically become the birds’ parents. They exercise the young cranes and lead them on short flights. This training is crucial to the cranes’ success, when they take to the air to follow the ultralight on their first migration. [Sounds of Whooping Cranes in flight]
“Seven states and 1285 miles lie between their fledging ground at Necedah National Wildlife Refuge in Wisconsin and their wintering grounds in Florida.”* [Sounds of cranes]
Find more about Operation Migration – and the cranes’ journey this season – on our website, birdnote.org. I’m Michael Stein.
###
* from website http://www.operationmigration.org
First featured call of the Whooping Crane provided by The Macaulay Library of Natural Sounds at the Cornell Lab of Ornithology, Ithaca, New York. Recorded by G. Archibald.
Ultralight aircraft, broadcasted brood call and final Whooping Crane call audio provided by Operation Migration: www.operationmigration.org. Recorded by Jeffrey Huxmann.
Producer: John Kessler
Executive Producer: Chris Peterson
© 2011 Tune In to Nature.org        January 2011     Narrator: Michael Stein