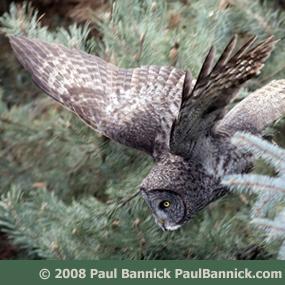 A few years ago, Paul Bannick went to photograph the Great Gray Owl irruption in Northern Minnesota. He writes: "I went out one morning before the sun had risen and found one owl that was in a particularly photogenic place. I watched that owl." Paul learned what the bird's habits were, and that give him the best chance to capture the image he wanted.

This is BirdNote!
[Hoots of the Great Gray Owl]
What does it take to photograph the essence of a bird?
Here’s photographer and naturalist, Paul Bannick.

“A few years ago I wanted to photograph the Great Gray Owl, so I went to Northern Minnesota. I went out one morning before the sun had risen and watched Great Gray Owls hunting. And I found one owl that was in a particularly photogenic place and I watched that owl -- where it flew to, where it perched, how did it come looking for prey?

After watching that one morning, I was prepared to come out the next morning. So I went out before sunrise and it was probably about 5:00AM, it was probably about minus 30 degrees, and it was snow with a pretty thick crust. And I trudged through the snow, in the dark, until I got to the place that I thought would give me the best chance of photographing that bird. And then I waited, and I waited for probably three hours, knowing I couldn’t move. Then I spotted the bird! And the bird started moving through the meadow, and my heart was racing as I saw the bird actually using the perches I saw it using the day before. And finally that bird launched and it launched the way I hoped it would. It launched towards me; it pursued a vole under the snow. It stopped. It paused. It looked at me and I got the sequence of shots I wanted.”

This bird is one of several featured in Paul Bannick’s book, The Owl and the Woodpecker: Encounters with North America’s Iconic Birds.
Learn more on our website, birdnote.org.

Learn more about Paul's book, The Owl and the Woodpecker.Check out Paul Bannick's Facebook page Great Gray Owl — More at the Audubon Guide to North American BirdsGreat Gray Owl - More at All About BirdsSee other BirdNote shows that feature Paul's photos 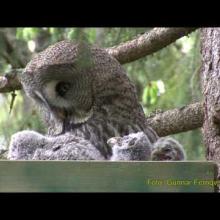 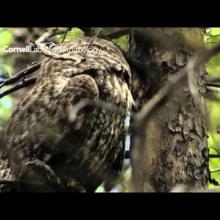