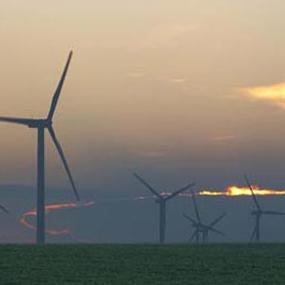 Wind farms allow us to convert renewable wind energy into electricity. The concept seems environmentally benign, but the windmills are often installed along the same ridges favored by migrating birds for their currents. The farms would be less hazardous to migratory birds if they were sited carefully and not placed in important migratory flyways - and if the older and more lethal machines were replaced with windmills that have more visible blades. Here's an innovation taking place in Chicago at Pepsico.

This is BirdNote!
[Sound of wind]
Wind farms -- long rows of 15-story, high-tech windmills with rotating blades – allow us to convert renewable wind energy into electricity. They sound environmentally benign, but there’s more to the story.
[More wind]
Wind farms are often installed along ridges where winds blow strong and steady – the same ridges favored by migrating birds for their currents. Many birds pass by without difficulty, but thousands are injured or killed when they don’t see—and collide with—the blades that rotate at up to 200 miles per hour.
The 5,000 windmills of the Altamont Pass wind farm in northern California, for example, produce enough electricity to power 120,000 homes for a year. Yet more than 1,000 migrating raptors are killed there each year, such as Red-tailed Hawks [Red-tailed keeer call] and Golden Eagles [Golden Eagle call].
Is there a solution that can benefit both people and birds? Here are two suggestions: site wind farms carefully so they are not placed in important migratory flyways; and replace older and more lethal turbines with windmills that have more visible blades.
How would you solve this dilemma? Send your ideas to BirdNote.org (info@birdnote.org).  I’m Frank Corrado.
###
Birdsound provided by The Macaulay Library of Natural Sounds at the Cornell Lab of Ornithology, Ithaca, New York. Call of the Red-tailed Hawk recorded by L.J. Peyton, Golden Eagle by A.L. Priori.
Producer: John Kessler
Executive Producer: Chris Peterson
© 2009 Tune In to Nature.org

Some great ideas about how to protect birds!Pepsico goes "green" with Chicago wind farm