Recording the Birds of Siberia

A quest from Taiwan to Arctic Russia. 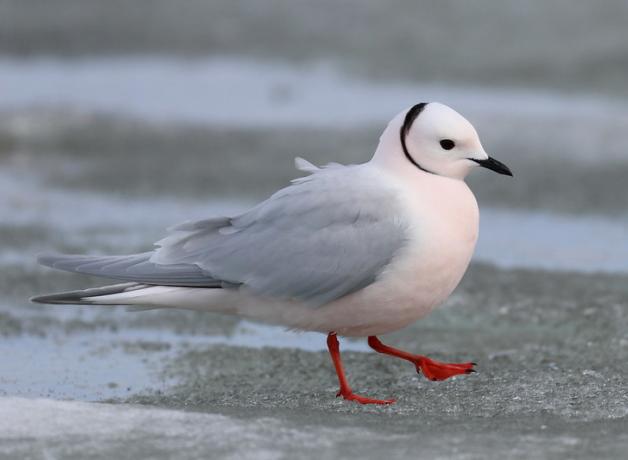 In 2017, researcher Sunny Tseng traveled from her home in Taiwan to the Arctic tundra to record the calls of the birds that breed there. She learned that navigating the wind-blown, marshy tundra is no easy task. Yet Tseng found and recorded one of her target birds: the Ross’s Gull, a rare, rosy-pink gull that nests on the tundra.

Hear more about the birds of the Siberian tundra, and hear the birds themselves, on the Threatened podcast.

Recording the Birds of Siberia

This is BirdNote.
[Tundra ambience]
In the summer of 2017, researcher Sunny Tseng traveled from her home in Taiwan to the Arctic tundra to record the calls of the birds that breed there. She soon learned that navigating the tundra is no easy task.
Sunny: It’s like walking in a marsh. Your feet sink down into the mud, to your knee. So it’s very deep. And every time you need to walk, you have to pull out your feet out of the soil. You have to step far and make your step as few as possible. But I am short leg. It is very hard!
One of her target birds was the Ross’s Gull — a rosy-pink bird during the breeding season. Ross’s Gulls nest in small colonies of two to ten pairs, which are difficult to spot. But with some help from a local Russian guide, Sunny was able to find a nest.
Sunny: And when I arrived there, I saw the parent bird fly to the sky and make this kind of alarm call. The parent birds try to attack me. So I just put my parabol[ic microphone] up in the sky, pointing to the birds. And the birds just flew directly to my parabola, calling loudly. At that time, I put my headphones up so I can hear the sounds — so vivid.
[Ross’s Gull field recording]
You can hear more about the birds of the Siberian tundra, and the birds themselves, on the Threatened podcast. Listen in your podcast app or at BirdNote.org. I’m Ari Daniel.
###
Senior Producer: John Kessler
Production Manager: Allison Wilson
Producer: Mark Bramhill
Associate Producer: Ellen Blackstone
Digital Producer: Conor Gearin
Field Recordings provided by Sunny Tseng
BirdNote’s theme was composed and played by Nancy Rumbel and John Kessler.
© August 2021 BirdNote
Narrator: Ari Daniel

By Jason Saul
Tweets into beats: