Red Knot Flies to the Moon and Back 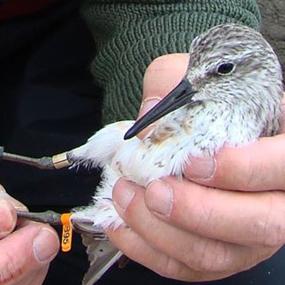 A trip to the moon would mean a flight of 239,000 miles, roughly the same as circling the Earth 10 times. This Red Knot, named B95 for its band number, is nicknamed "Moonbird." Why? This male sandpiper was first banded in 1995 and spotted again -- on his migration through New Jersey -- in May 2014. Red Knots nest above the Arctic Circle and winter near the tip of South America. So they migrate about 16,000 miles round trip each year. That means B95’s cumulative migration flights would have carried him to the moon — and he’d already be on his way back!

RARE and the Shorebird Recovery Program at Manomet Center for Conservation Sciences are helping to protect habitat for Red Knots.

This is BirdNote.
[A few phrases from “Fly Me To The Moon” sung by Frank Sinatra]
Ever thought of flying to the moon? You’d need to buckle up for a flight of 239,000 miles. That’s roughly the same as circling the Earth 10 times.
But you still wouldn’t have flown as far as a Red Knot that was named B95 [after a tag was placed on its right leg] [Red Knot calling]. This male sandpiper was first banded in 1995. Now Red Knots migrate about 16,000 miles round trip each year. They nest above the Arctic Circle and winter near the tip of South America. That means B95’s cumulative migration flights would have carried him to the moon -- and he’d already be on his way back.
[Red Knot song and calls]
In spite of the birds’ astonishing abilities, Red Knot populations have declined severely in recent decades. The migrating birds rely on critical resting and feeding areas such as Delaware Bay. [Calls from flock of Red Knots] In South America, conservation groups, including the international organization RARE and the Manomet Center [pronounced Man-a-met], are helping protect three crucial wintering sites in Argentina.
Red Knots and other long-distance travelers deserve – and depend upon – healthy coastal ecosystems throughout the Western Hemisphere.
[Red Knot song and calls]
To take a look at programs working on their behalf, begin at birdnote.org.
###

Bird sounds provided by The Macaulay Library at the Cornell Lab of Ornithology, Ithaca, New York. Songs and calls of Red Knot [137542] recorded by G. Vyn.
Large flock of Red Knots [10001] recorded by Martyn Stewart, naturesound.org.
"Fly Me to the Moon" sung by Frank Sinatra on the Nothing But the Best album, Frank Sinatra Enterprises, 2008.
BirdNote’s theme music was composed and played by Nancy Rumbel and John Kessler.
Producer: John Kessler
Executive Producer: Chris Peterson
© 2014 Tune In to Nature.org  May 2014  Narrator: Michael Stein
ID#      REKN-01-2014-05-09    REKN-01

The Washington Post has more! Dec. 2014Spotted again - May 2014!Learn about RARE's Campaign for Red Knot Habitat PreservationSO much more to learn, at MoonBird.org!Check out Phil Hoose's book about B95 - "Moon Bird!"Read "Protecting the Winter Habitat of the Red Knot"Learn about B95 and another Red Knot, H3H!Western Hemisphere Shorebird Reserve Network has moreCheck out the Red Knot Working GroupRed Knot – More at All About Birds 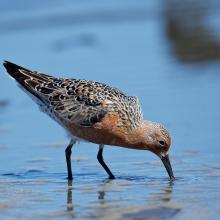 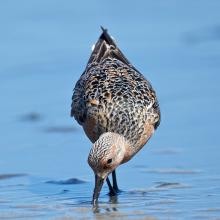 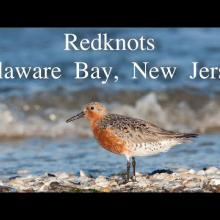 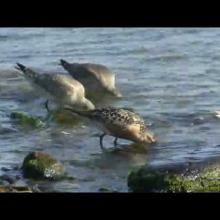