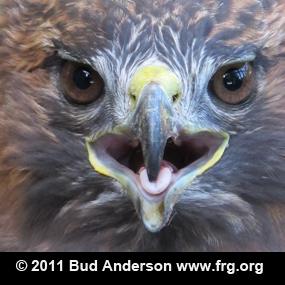 To protect passengers, planes, and birds at Seattle’s Sea-Tac airport, biologists Bud Anderson of the Falcon Research Group and Steve Osmek capture, relocate, and monitor Red-tailed Hawks. The birds are banded, wing-tagged, and released 80 miles north. Bud says, “Almost none of them come back to the airport. So we’re learning that the program’s very effective.” If you see a wing-tagged Red-tailed Hawk in the Pacific Northwest, please report it to wingtaggedhawks@portseattle.org.

This is BirdNote.
[Scream of Red-tailed Hawk and roar of jet airplane taking off]
To protect passengers, planes, and birds at Seattle’s Sea-Tac airport, biologists Steve Osmek and Bud Anderson capture, relocate, and monitor the travels of Red-tailed Hawks. The birds are banded, wing-tagged, and released 80 miles north of the airfield. Steve Osmek explains the importance of marking the birds so they can be identified:

Track 236 (Approximately 40:34)
There’s been a long … debate among airports and airport biologists that it may not be a wise thing to be trapping and relocating raptors because there could be a tendency for these birds to come back to airfields. And so in order to test this theory, it made a lot of sense to us to make sure that we mark every bird. One, you can tell without a question if you have a problem bird that continues to return. But the other thing that it’s telling us is that these birds are not going to other airfields with any more frequency than they’re going to other places.

Since the program began they've moved more than 660 raptors of 11 different species.  Bud Anderson describes the results of their work:

They’re showing up all over, anywhere from Victoria on Vancouver Island...all the way down to south of Portland. So these guys move everywhere and almost none of them come back to the airport. So we’re learning that the program’s very effective.