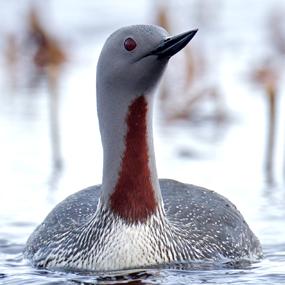 The word “loon” comes from the Old Norse word for “lame.” Because their feet are so far back on their bodies, loons cannot walk on land. But in flight, they’re graceful, and under water, they're swift in pursuit of fish. Red-throated Loons – like this one – breed in the far north and winter along both coasts of the United States.

[Rushing water and waves on rocks]

Stand on a rocky headland above the turbulence of the tidal surge flowing like a river. Loose groups of Red-throated Loons in flight, perhaps a thousand altogether, stream past. The tide has turned at Deception Pass at the north end of Whidbey Island in Washington State.

[Call of a Red-throated Loon]

The loons gather here in winter. The once great salmon and steelhead rivers still carry nutrients from the Cascade Mountains to feed the marine life of northern Puget Sound. In some years, forage fish such as surf smelt abound. They’re caught in the irresistible tug of the tide, pulled out to sea through the granite defile of the pass. The loons fly to the throat of the pass and feast as the current carries them down.

[Sounds of rushing water and waves on rocks]

The loon’s name derives from the Old Norse word for “lame.” Because their feet are so far back on their bodies, the birds cannot walk on land. But in flight, they’re graceful, and under water, swift in pursuit.
Some creatures with which we share the world have been diminished almost to disappearance. But if we look, we can still find great natural abundance. As we have today.