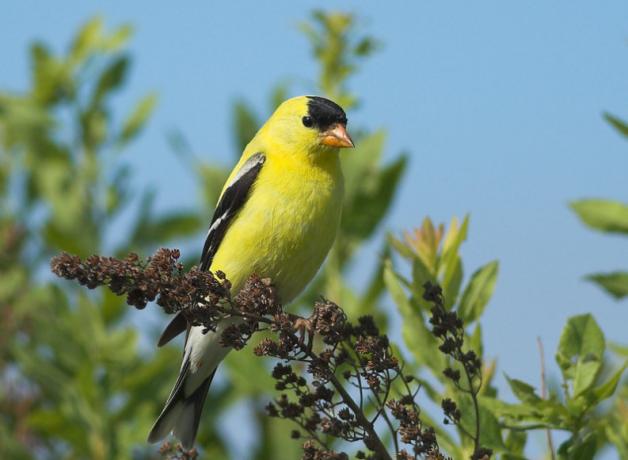 Across the country, native prairie occupies only small fragments of its former range. On Washington's Whidbey Island, the Whidbey Camano Land Trust is restoring a remnant prairie. Land Steward Cheryl Lowe explains: "We're planting 23 different species of native prairie plants." As the prairie begins to rebound, seed-eating birds like sparrows and finches - including this American Goldfinch - will benefit. So will fruit-eating species that enjoy wild strawberries. (See the transcript for a list of plants.)  Visit wclt.org to learn more about this program.

This is BirdNote!
[Song of White-crowned Sparrow]
Across the country, native prairie occupies only small fragments of its former range. We’re here today on Washington’s Whidbey Island with a group restoring a remnant prairie. Wrapped up against the cold, they’re creating deep, narrow holes in the soil, into which they’re fitting the roots of young native plants.
[Clanging of the dibble sticks]
Cheryl Lowe*, Land Steward for the Whidbey Camano Land Trust, explains:
G2 T12 :30 So, we’re planting 23 different species of prairie plants – so we have about seven thousand camas bulbs, chocolate lily, harvest brodiaea….
G2 T12 1:10 And we’re also going to be sowing a few seeds but most of the rest of them are plants that we’ve grown into plugs. And some of those include the red fescue, the woolly sunflower, wild strawberry…luzula…. aster… showy fleabane… [Editor's note: See below for more information.]
G2 T12 :12 We’re planting 30,000 total – about seven thousand bulbs and 20-something thousand plugs.
[Prairie Ambient]
As the prairie begins to rebound, seed-eating birds like finches and sparrows will benefit. So will fruit-eating species that enjoy wild strawberries. The restored prairie will provide cover for these small birds during the breeding season, and attract voles and field mice, food for resident and migrating raptors.
[Cry of a Red-tailed Hawk]
You can learn more about the work of the Whidbey Camano Land Trust on our website, birdnote.org. Today’s show was brought to you by The Lufkin Family Foundation.
###
Featured bird sounds provided by The Macaulay Library of Natural Sounds at the Cornell Lab of Ornithology, Ithaca, New York.  Song of white-crowned Sparrow recorded by T.G. Sander; song of Goldfinch by G.A. Keller; call of Red-tailed Hawk by L.J. Peyton.
Sounds of planting and ambient prairie recorded by C. Peterson (Ebey’s Prairie in May)
Producer: John Kessler
Executive Producer: Chris Peterson
© 2011 Tune In to Nature.org            February 2011     Narrator: Mary McCann 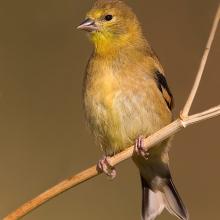 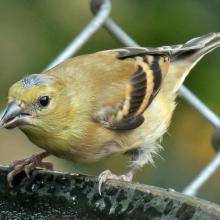 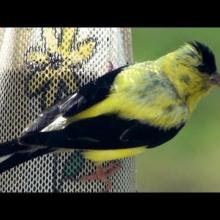