Robins and Berries in Winter 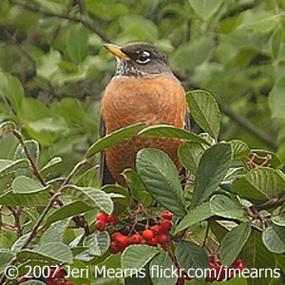 It's mid-winter, and a passing flock of robins suddenly drops out of the sky. A moment ago, the yard was empty of birds, but now it's full. They settle in a bush laden with fruits. When the robins pass over a fruiting shrub, those red berries signal like a neon sign on a restaurant. Time to stop for a meal!

Check out Related Resources below to learn how you can attract robins and other birds to your yard.

BirdNote®
Robins and Berries in Winter
Written by Dennis Paulson

Have you ever had a mob of birds descend on your yard in midwinter? A passing flock of robins suddenly drops out of the sky. A moment ago, the yard was empty of birds, but now it’s full. They settle into a mountain ash or winterberry laden with bright red berries. They seem everywhere, gulping down the fruit or jumping into the air in brief flight to snatch a berry from a hanging branch. [Sounds of European Starling flock]

Sometimes other fruit-eating birds, such as these starlings, accompany them. The species often travel together while searching for food. Imagine what the world looks like to a wandering flock of robins on a dreary winter day. There isn’t much in the way of bright color down below, but when they pass over a fruiting shrub, those red berries signal like a neon sign on a restaurant. Time to stop for a meal! [Sounds of robin flock]

A flock of a dozen robins can strip a heavily laden plant of every last berry in half an hour. Then off they go, looking for the next open-air restaurant. [Sounds of robin flock]

You can learn how to provide a feast for your backyard birds when you come to our website, BirdNote.org. BirdNote’s produced by John Kessler. Our writers include Bob Sundstrom, Rick Wright, Todd Peterson, Ellen Blackstone and Gordon Orians. The music was composed and played by Nancy Rumbel and John Kessler, and I’m Mary McCann.

Editor's note: While robins and other birds are drawn to non-native plants, we highly recommend planting native plants in your yard. Check with your local Master Gardener to find suitable plants to attract birds, bees, and other wildlife.

Learn about safe backyard birdfeedingLearn about gardening for wildlife from Audubon At HomeLearn about birds & gardens at AWayToGarden.comLearn about "ecosystem gardening!"Find a Master Gardener for your area American Robin — More at the Audubon Guide to North American BirdsAmerican Robin - More at All About Birds