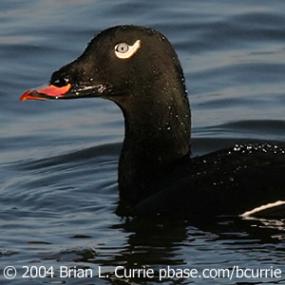 Tony Scruton is a sentinel of seabirds; he's on the water at least six times a week, year 'round. He has been closely observing seabirds for more than 30 years. And as he tells it, numbers of murres and scoters - like this White-winged Scoter - have dwindled. There are barely one-tenth of the grebes that he once saw. And some species of birds have disappeared entirely. Find out more about seabird conservation. Learn more about the White-winged Scoter at Cornell's All About Birds.

This is BirdNote!
[Water sounds at the dock, and the boat coming in.]
Tony Scruton (pronounced Screw-ton) is a sentinel of seabirds. Out on the water six days a week year ‘round, he is one of those among us who keeps watch over a special place. Crossing open water between islands, he describes what he’s witnessed:
“Well I can safely say, there’s been a population crash….in a thirty-year period…

“…When I first came, there were Puffins up on one of the little rookeries …north they disappeared in the ‘70s”

It’s anecdotal, but it’s real.”
We’re lucky to have people who observe nature carefully. And we’re fortunate to have conservation organizations to engage people in responding to what sentinels, like Tony Scruton, are seeing. Do you have a special place that needs your abiding attention?  For BirdNote, I’m Frank Corrado.
###

Photographer
Support More Shows Like This
Tagspesticides and toxins ocean