What happens when a species’ population swells beyond the capacity of its habitat? 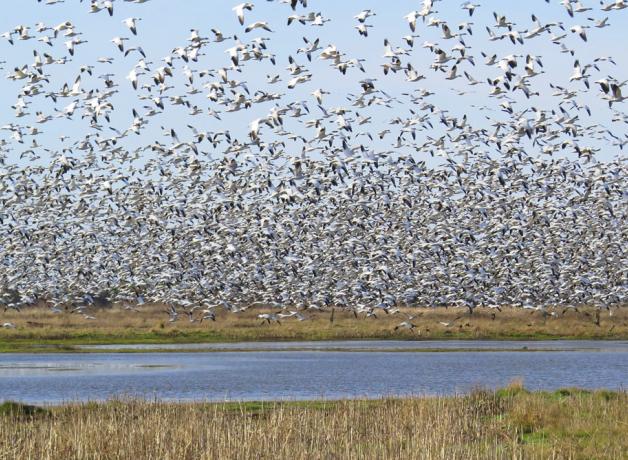 When small family farms gave way to large, industrial agricultural operations, the Snow Geese followed. Waste grain left over from harvests has allowed Snow Goose populations to jump. Now, there are so many Snow Geese they degrade their Arctic summer habitat, threatening other birds. Is there a right way forward from a “conservation” standpoint?

Large migrant flocks of Snow Geese descend on the Lower 48 states in October and November, returning from their summer breeding grounds in the Arctic. The geese are an entrancing natural spectacle in sparkling white — but there is a problem.

“Conservation” usually means protecting declining species and critical habitats. But what happens when a species’ population swells beyond the capacity of its habitat? How should we handle it? Too much of a good thing — that is the Snow Goose conundrum.

Snow Geese numbers have ballooned, from fewer than a million in the 1960s to perhaps 15 million today. The geese overwhelm the Arctic tundra where they nest, degrading breeding areas they share with nesting sandpipers and other birds.

Until the 1960s, the geese wintered in salt marshes and prairies. But with the rise of large-scale agriculture, the geese have learned to take advantage of the bonanza of waste grain, left scattered after the harvest. Now, many more Snow Geese survive the winter, and their numbers have soared.