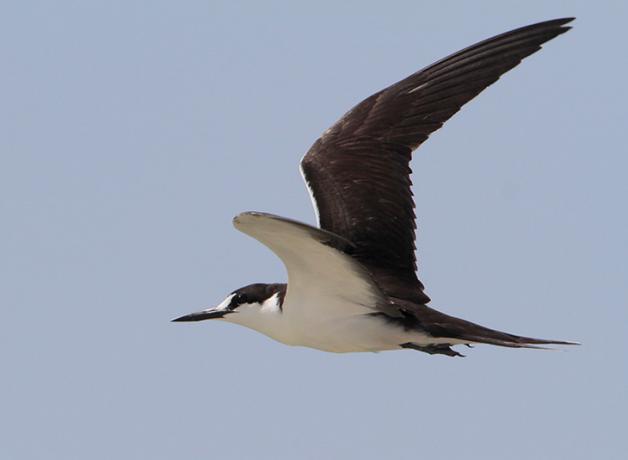 Sooty Terns have long been called "wide-awakes" because of their calls. But it may describe their sleeping habits, too. When young terns leave their breeding grounds, they don't return for several years. They do not rest on the water, and only rarely land on floating objects. They feed while aloft, grabbing prey from the ocean's surface. On the fly, they also capture fish that have been chased out of the water by predators. In other words, Sooty Terns live in the air for years at a time.

This is BirdNote.[Waves and the calls of Sooty Terns – V.W. Ward]

Every summer, 50,000 Sooty Terns breed on Bush Key in the Dry Tortugas Islands off the coast of Florida. Each pair of these graceful black-and-white birds incubates their single egg in a scrape on the sand. Then they bring back fishes and squids from far offshore to feed the young bird that hatches from it. The colony resounds with their calls.[Adult and juvenile Sooty Tern calls; large colony – C.A. Sutherland]

Watching the cloud of birds over this tiny island, you are in the presence of amazing travelers. The young terns will soon leave, not to return for several years. They will travel out over the Caribbean and the Atlantic, many of them as far as waters off West Africa, before returning home.

On the wing day and night, they do not rest on the water, and only rarely land on floating objects. They even feed while aloft, grabbing their prey from the ocean’s surface. On the fly, they also capture fish that have been chased out of the water by predators. In other words, they live in the air for years at a time. Even more amazing, they do not seem to sleep in the same way as most animals. Perhaps they catch a snooze in flight; we just don't know! [Calls of Sooty Terns, colony]

Some say Sooty Terns derive their nickname “wide-awake” from the “ker-wacky-wack” or “wacky-wack” of their calls.  Now we know it also describes their sleeping habits. 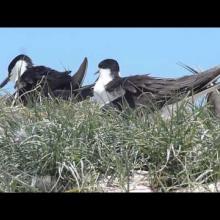 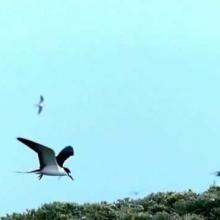