Spring Serenade in the Ozarks, With Steve Hilty 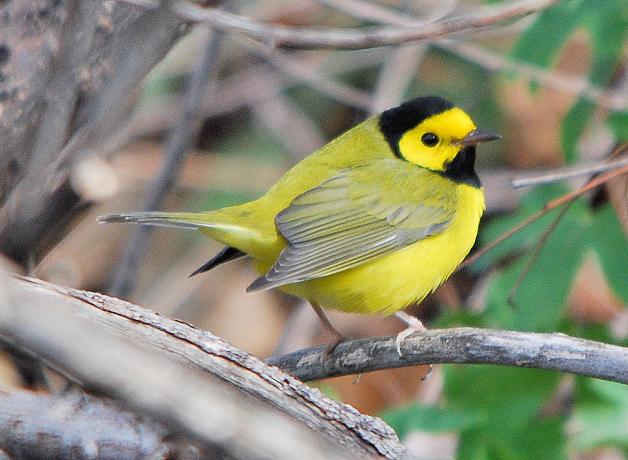 The Buffalo National River in the Ozark Mountains of northern Arkansas was the first "national river" in the US. The river, part of the Ozark National Scenic Riverways, runs undammed for 135 miles. Its forest habitat is a great place for birds and other wildlife. There are at least 18 species of warblers that breed here, including the Louisiana Waterthrush, the Kentucky Warbler, and this Hooded Warbler.

Why not plan a trip to this beautiful place?

Spring Serenade in the Ozarks
With Steve Hilty, PhD

“In the springtime it’s just a marvelous place to drift down the river in a canoe early in the morning and listen to the bird sounds!”

That’s nature guide Steve Hilty describing an outing at dawn on the Buffalo National River in the Ozark Mountains of northern Arkansas.
“You know, there’s 18 species of warblers…that breed in here this area and two-thirds of those you could probably hear in any one morning just canoeing down the river. Louisiana Waterthrush, [song of Louisiana Waterthrush], Hooded Warbler [song of Hooded Warbler], Kentucky Warbler [song of Kentucky Warbler] and of course there’d be Great Blue Herons and Wood Ducks flushing up ahead as well.” [Call of Wood Duck]
To many people, the Ozarks are undiscovered country. But many birds thrive there.
“So there’s a lot of habitat present, today…And because of all the forest in the Ozarks, why it’s just a wonderful place for many of these little forest-dwelling birds!”

“To me the most vivid experience that I take away from the Ozarks is…listening to the bird songs. Since childhood I’ve always been very attuned to bird song. And the serenade of birds early in the spring, when birds are first returning and beginning to set up territories…is as good or better than any place I’ve heard, anywhere in the country. It’s just spectacular!
[Schell/Osage recordings featuring + Downy Woodpecker + warblers, others]
Today’s show brought to you by the Bobolink Foundation. Find us at BirdNote.org.
###
Soundscapes – Schell/Osage#3, canoe paddling, waters flowing in today’s show were recorded by Gordon Hempton and provided courtesy of QuietPlanet.com.
Bird sounds provided by The Macaulay Library of Natural Sounds at the Cornell Lab of Ornithology, Ithaca, New York. Song of Lousiana Waterthrush [ML 112695] recorded by C. Marantz, song of Hooded Warbler [ML 84888] W.L.Hershberger, song of Kentucky Warbler [ML 176139] by G.A. Keller; call of Wood Duck [2468] by G.B. Reynard.
BirdNote's theme music was composed and played by Nancy Rumbel and John Kessler.
Producer: John Kessler
Executive Producer: Chris Peterson
© 2014 Tune In to Nature.org         May 2018/2020        Narrator: Michael Stein   Marantz VI Tracks 186, 187, 190, 194 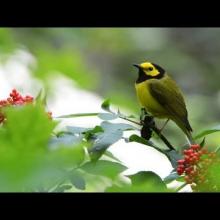 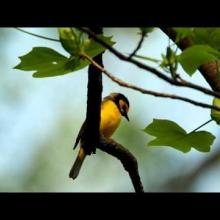 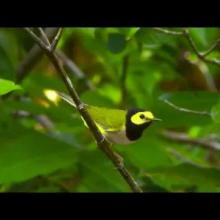