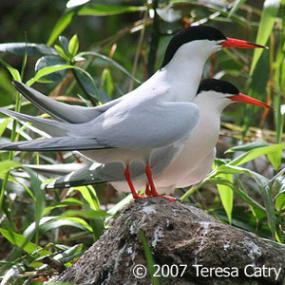 An endangered species in the northeastern part of the US, the Roseate Tern survives only with vigilant protection of its remaining nesting sites. One key site is the Stewart B. McKinney National Wildlife Refuge in Connecticut. The refuge's critical habitats help sustain nearly 300 bird species every year. It's the result of foresight and planning by people who care about nature.

This is BirdNote.
[Soft calls of Roseate Terns]
A Roseate Tern calls softly, as it flies along the Connecticut shoreline of Long Island Sound. This dainty, graceful seabird is named for the subtle blush of pink on its breast. [Soft calls of Roseate Terns]
The Roseate Tern, an endangered species, survives only with vigilant protection of its remaining nesting sites. One key site is the Stewart B. McKinney National Wildlife Refuge in Connecticut.  Today, fewer than 30 pairs nest there each summer on Falkner Island, down from 230 pairs just a generation ago.
[Soft calls of a Roseate Tern] [Waves]
The McKinney Refuge stretches along parts of Connecticut's shoreline in the heart of the Atlantic Flyway. Its critical habitats of islands, barrier beaches, and tidal wetlands help sustain nearly 300 bird species every year.
National Wildlife Refuges dot the fifty states. They’re superb places to experience and learn about nature. And they provide an essential haven for wildlife, including the endangered Roseate Terns of Connecticut.
[Soft calls of Roseate Terns]
Visit our website, BirdNote.org, to learn which national wildlife refuge is nearest you. But don’t stop there. Visit the refuge and you’ll discover a remarkable ecosystem. Experience for yourself the result of foresight and planning, by people like you, who care about nature.
[Soft calls of a Roseate Tern and waves]
For BirdNote, I’m Michael Stein.
###