A tiny seabird once seen as a bad omen. 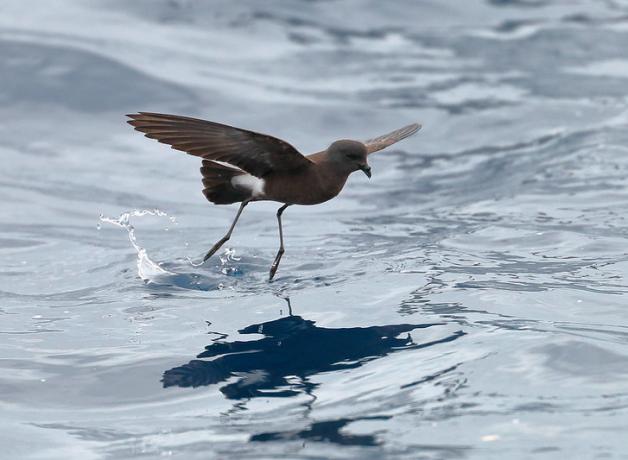 Sailors once believed Wilson’s Storm-Petrels foretold a dangerous tempest. There might be a grain of truth: the tiny seabirds might find a little shelter from the gusts near a ship. Wilson’s Storm-Petrels are found in every ocean. When foraging, their feet patter across the surface, stirring up prey. Their fondness for feeding in cold, salty water could make them an indicator for changes in ocean conditions due to climate change.

Sailors once believed that Wilson’s Storm-Petrels foretold a dangerous tempest. The bird’s dark wings and white-banded tail were an omen of trouble on its way to the ship.

Like many legends, there’s probably a grain of truth. Wilson’s Storm-Petrels are tiny seabirds weighing just over an ounce. During a gale, hiding beside a large ship could provide a little shelter from the gusts.

Wilson’s Storm-Petrels occur in every ocean, preferring cold, salty water rich in plankton. Their feet patter across the surface to stir up small prey items such as krill and small fish. When traveling, they often glide on powerful ocean winds.

Wilson’s Storm-Petrels breed on the cliffs of islands in the southern oceans, South America, and Antarctica, where they sometimes nest as far as 70 miles inland. Unlike most seabirds, they raise their young in burrows, perhaps giving them some security from predators like skuas and gulls.

The storm-petrels’ reliance on cold, salty water for food could make them an early warning sign of sorts, though not in the way those sailors thought. Climate change is altering ocean temperatures and salinity. Shifts in storm-petrel feeding behavior on the surface may reflect changes in ocean conditions below. 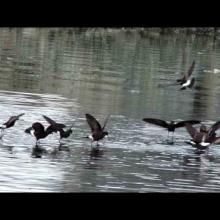