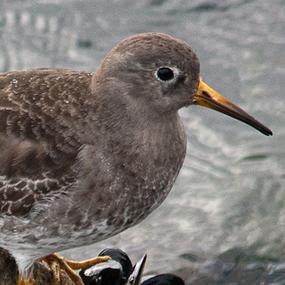 On the north Atlantic coast, a slate-gray sandpiper picks among the barnacles and mussels that encrust a jetty’s massive boulders. At the same moment, a parallel scene unfolds on the north Pacific Coast. A slate-colored sandpiper emerges from the salt spray to forage over a windswept jetty. These look-alikes are the Purple Sandpiper of the Atlantic (pictured here) and the Rock Sandpiper of the Pacific. They embrace a seemingly perilous life amid storm-tossed boulders instead of probing sheltered mudflats like so many of their kin.

Support for BirdNote comes from Forterra, saving keystone places for people and nature in the Pacific Northwest.

On the north Atlantic coast, a winter storm sends waves crashing over a rocky jetty. [Breaking waves] As the waves retreat, exposing the rocks once more, a slate-gray sandpiper clambers up. Using its long bill, it picks among the barnacles and mussels that encrust the jetty’s massive boulders.

At the same moment, a parallel scene unfolds on the north Pacific Coast. [Breaking waves] A slate-colored sandpiper emerges from the salt spray to forage over a windswept jetty.

They wouldn’t normally be singing in winter on the jetties, but their songs are just too good to pass up! [Rock Sandpiper song]

[These mixed-species flocks scramble back and forth across the rocks, plucking tiny mollusks and crustaceans from among the barnacles and patches of seaweed – then sheltering in the safety of a crevice as the next inbound wave begins to break.] [Winter wind and breaking waves] 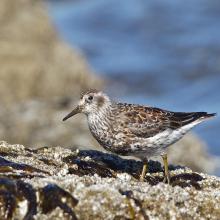 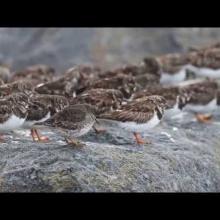 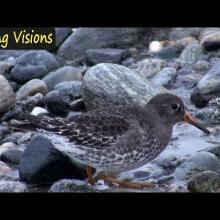