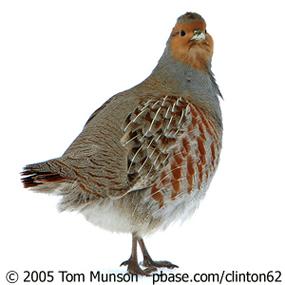 The Twelve Days of Christmas began as a French love song. The song's age is uncertain, but likely dates to at least the Sixteenth Century. A woman's generous "true love" delivers gifts over the twelve days. The first seven days' gifts are all birds. The "five gold rings" were gold Ring-necked Pheasants. And the partridge in a pear tree was probably the Red-legged Partridge, a cousin to this Gray Partridge.

Birding “The Twelve Days of Christmas”

This is BirdNote!
[A few bars of “The Twelve Days of Christmas”]
‘Tis the season, and high time to recognize a traditional Christmas song that teems with birds.
[“Twelve Days of Christmas”]
“The Twelve Days of Christmas” began as a French secular love song. Sung by a woman, her generous “True Love” delivers gifts over the Twelve Days, then reckoned as sunset December Twenty-fifth (the birth of Christ) to sunset January Sixth (the arrival of the Magi). The song’s age is uncertain, but likely dates to at least the Sixteenth Century.
The first seven days’ gifts are all birds. That alliterative “partridge in a pear tree” was probably the Red-legged Partridge. [Gray Partridge] Day Two’s Turtle Doves [Eurasian Collared Doves] are oddly out of season, having migrated out of France to Africa for the winter. The three French hens were domestic fowl. [chickens]
The four “calling birds” were originally “colly birds,” or birds black as coal. This refers to Europe’s Blackbird, [European Blackbird] an inky cousin of our familiar robin. Day Five’s “gold rings” were traditionally pictured as gold Ring-necked Pheasants. [Ring-necked Pheasant] That leaves six domestic geese and seven water-loving Mute Swans, the common regional species.
[“Twelve Days of Christmas”]
Clearly, birds do bring joy to the Christmas season.
###
Calls of the birds provided by The Macaulay Library of Natural Sounds at the Cornell Lab of Ornithology, Ithaca, New York. For Red-legged Partridge we had to substitute a Gray Partridge recorded in England (http://www.garden-birds.co.uk/birds/red-legged_partridge.htm); Eurasian Collard Dove by A.B. van den Berg; European Blackbird by M.P. McChesney; Ring-necked Pheasant by G.F. Budney.
Producer: John Kessler
Executive Producer: Chris Peterson
© 2013 Tune In to Nature.org     December 2017     Narrator: Frank Corrado 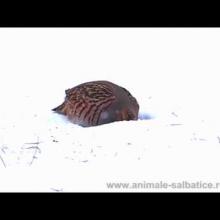 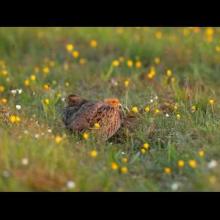