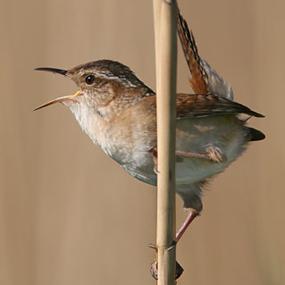 When a Canyon Wren sings, the brilliance of its sweet music can stop you in your tracks. But when its cousin, the Marsh Wren (seen here), sings, you may reach for your earplugs. Why do two closely related birds sing such contrasting songs? In the wren’s world, where song is essential to attracting mates and repelling rivals, it’s all about being heard.

We’d like to hear from you! Drop us a line at [email protected] and let us know what you think about our shows.

When a Canyon Wren sings, the brilliance of its descending notes can stop you right in your tracks. [Canyon Wren song] But when its cousin, the Marsh Wren, sings, you may reach for your earplugs. [Western Marsh Wren song]

The answer lies in where they sing. For a song to be effective – for it to be heard loudly and clearly by others of its species – the song must carry well in the bird’s habitat. The Canyon Wren inhabits canyons and cliffs, a domain of hard stone. Its silvery notes bounce wonderfully across its stony realm.

In contrast, Marsh Wrens [in background - Western Marsh Wren song] sing from deep within dense reeds and cattails. Their songs are loud and low pitched, flurries of short, hard notes – songs evolved to power through a mass of vegetation.

[Canyon Wren song softly in background] We humans may find one wren song more pleasing to the ear than the other. But in the wren’s world, where song is essential to attracting mates and repelling rivals, it’s all about being heard.

Photographer
Support More Shows Like This
Tagsbirdwatching by ear vocalization 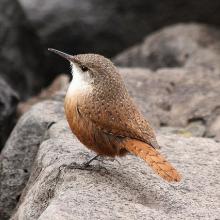 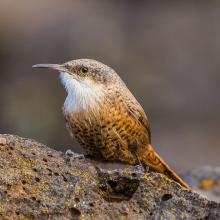 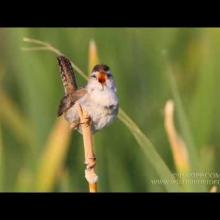 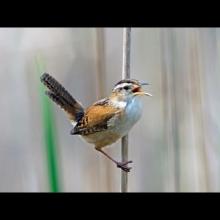