Only Some Birds Have a Sweet Tooth 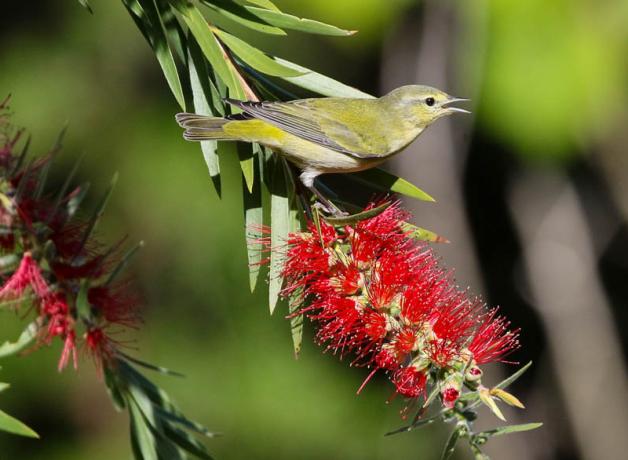 Have you seen a larger bird dipping its sharp bill into your hummingbird feeder? It’s probably an oriole. These brightly colored birds winter in the tropics, where they often drink nectar from flowers. Tennessee Warblers — like this one — are often seen at flowers during migration. These birds have an adaptive advantage, since many birds can’t digest the sucrose of nectar. When they fly to the tropics in winter, their sweet tooth allows them an added source of nutrition.

Only Some Birds Have a Sweet Tooth

This is BirdNote.
[Ruby-throated Hummingbird wing hums, https://macaulaylibrary.org/audio/176299, 0.22-.25]
Put up a nectar feeder for hummingbirds, and you may soon enjoy the thrill of the tiny gems hovering right outside your windows.
[Ruby-throated Hummingbird wing hums, https://macaulaylibrary.org/audio/176299, 0.22-.25]
But you might also entice other birds that have a … sweet tooth.
[Bullock’s Oriole call, https://macaulaylibrary.org/audio/50152, 0.13-.16]
Have you seen a larger bird dipping its sharp bill into your hummingbird feeder? It’s probably an oriole. You’re most likely to see Baltimore and Orchard Orioles in the East and Bullock’s or Hooded Orioles in the West. These birds, whose bright colors spice up our summer, spend their winters in the tropics, where they often drink nectar from flowers.
The same goes for smaller birds, like Tennessee Warblers, often seen at flowers during migration. [Tennessee Warbler song, https://macaulaylibrary.org/audio/133349#_ga=1.59284269.1093412267.1484…, 0.10-.14]
But many birds shun nectar. Birds need the enzyme sucrase in their bodies, in order to digest the sucrose of nectar. And most simply don’t have enough. Scientists think birds that can readily digest sugar, like warblers, have an adaptive advantage. When they fly to the tropics for the colder months, they can tap into sources of sugar that other birds just can’t handle.
That sweet tooth, it turns out, is important to their survival.
For BirdNote, I’m Michael Stein.
###
Bird sounds provided by The Macaulay Library of Natural Sounds at the Cornell Lab of Ornithology, Ithaca, New York. 176299, 50152, and 133349 recorded by Geoffrey A Keller.
BirdNote’s theme music was composed and played by Nancy Rumbel and John Kessler.
Producer: John Kessler
Managing Producer: Jason Saul
Associate Producer: Ellen Blackstone
© 2017 Tune In to Nature.org  July/August 2017/2021  Narrator: Michael Stein

Only some birds are adapted to eat sugar: http://insider.si.edu/2015/06/sweet-survival-some-birds-have-a-sugar-ed…
Deploy a nectar feeder made especially for birds like orioles:
http://www.hummingbird-guide.com/hummingbird-feeders-attract-other-bird…