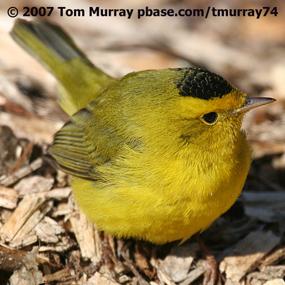 Back in September, BirdNote began following a tiny Wilson's Warbler as it migrated south to the tropics. We visited the warbler again in December, on its wintering grounds on a shade-grown coffee farm in Belize. As April arrives, the sprightly bird is migrating northward, with males typically preceding females.

BorealBirds.org is working to protect this bird and all migratory birds.

This is BirdNote!
Back in September, BirdNote began following a tiny Wilson’s Warbler as it migrated south from the Pacific Northwest to the tropics. We visited the warbler again in December, on its wintering grounds on a shade-grown coffee farm in Belize. [Call notes of Wilson’s Warbler]
As April arrives, the sprightly yellow bird with the black cap is migrating northward. Flying at night, it may cover hundreds of miles a night with a good tailwind. Under the cover of darkness, the warbler avoids encounters with hawks. And the night-time atmosphere is less turbulent. The warbler spends days foraging on the spring flush of insects – often several days in one area – restoring the energy needed for the long journey north. It may migrate in loose association with small numbers of other Neotropical migrants such as vireos, flycatchers, and other warblers.
[Wilson’s Warbler song]  Males typically precede females northward. When they arrive at their breeding grounds, they immediately begin to sing on nesting territories to attract mates. [Wilson’s Warbler song] Often they return to the very same patch of low shrubby habitat they have occupied in previous years. [Wilson’s Warbler song]
To learn more about protecting and enhancing habitat for birds and all wildlife, come to BirdNote.org.
###

Buy Song Bird Coffee to support BirdNote, the ABA, and wintering songbirdsMigratory birds and shade-grown coffee - Learn more from the Smithsonian!More about Wilson's Warbler migration & conservationWilson's Warbler - More at All About Birds 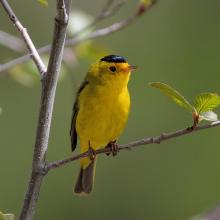 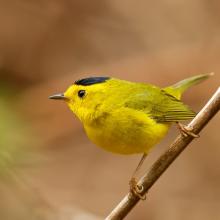 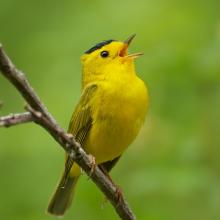 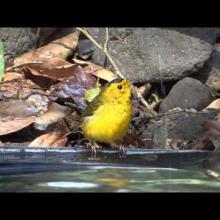 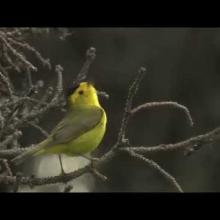 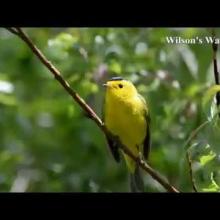