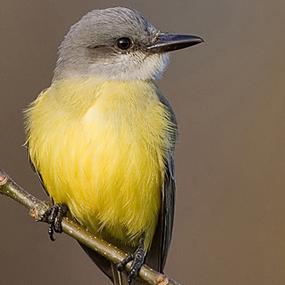 Ornithologists think a glitch in a gene that controls migration in Tropical Kingbirds causes them to fly in exactly the wrong direction. From their Arizona breeding grounds, they head northwest in fall, rather than southeast to their usual wintering haunts in Mexico. Learn more at Cornell's AllAboutBirds.org.

Tropical Kingbird - More at All About Birds