"You Need a Mister!" 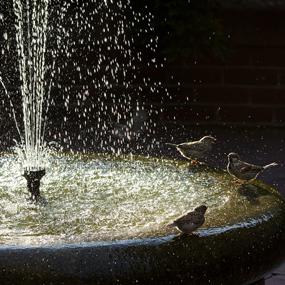 Ken Jacobsen is a retired senator in Washington State who’s a keen birder. When he was on the campaign trail, Jacobsen often advised constituents on ways they could improve conditions for birds in their yards and neighborhoods. You won’t believe what happened when he encouraged one constituent to add a mister to her birdbath!

"You Need a Mister"

From an interview by Chris Peterson

"Animals and humans belong together," says Ken Jacobsen. He’s a retired senator in Washington State who was a tireless campaigner in favor of a bill that permits the presence of dogs in pubs. But it’s not only dogs he loves. Jacobsen’s also a keen birder. He told BirdNote the following cautionary tale about his days on the campaign trail:

When I’m campaigning for office, I’m notorious for recommending to constituents how they can improve the opportunities for birds in their yard. Well one thing you can do is put in a dripper or a fine spray in your birdbath and that will really pull the birds down from up high, So you get more warblers, and so on.

So anyway I was door-belling one day and it was really hot. So I door-belled this lady obviously over eighty, and I talked to her and everything’s fine. And then I noticed that down by the side of the house, she had a birdbath with just tepid water in there, and there wasn’t any bird in this world that would use that birdbath.

So I said to her "You know what you need? You need a mister."

And anyway she said, "Young man, I’ve outlived two misters, and I don’t need another mister to take care of," and slammed the door on me. [Chuckles]

"Politicians are like crows," says Jacobsen. "Nobody likes them, and you can never get rid of them."

For BirdNote, I’m Mary McCann. You can get weekly updates, and links to all things ornithological, at BirdNote.org

Learn ways to help birds in your yard