Rita Shultz is a friend to bluebirds!

Rita Shultz, a rural mail carrier outside of Richmond, Virginia, says, "Every person's yard is an important bird area!"

Many customers on Rita's mail route also have newspaper delivery boxes, open at one end. When Rita discovered that Eastern Bluebirds were nesting in the boxes – and that many customers were throwing the nests out – she went into high gear. Rita asked all the people on her route if she could put up bluebird boxes on their property. More than half of them agreed! As one of her customers said, “It takes a village to raise a bluebird.”

After Rita and a friend put up the boxes, the bluebirds needed no coaxing. They moved quickly from the old boxes to the new ones, tailor-made for them. Baffles help protect the nests from predators.

She now bands the baby bluebirds, too, and reports the records to the USGS Bird Banding Laboratory. A great way to monitor the health of the bluebird population! 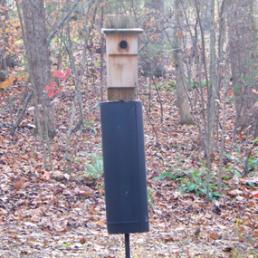 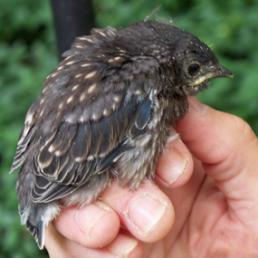