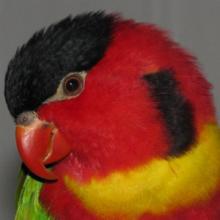 grrlscientist is the pseudonym of an evolutionary ecologist and ornithologist who writes about evolution, ethology, and ecology, especially in birds. After earning a degree in microbiology and working at the Fred Hutchinson Cancer Research Center in Seattle, she earned her PhD in zoology from the University of Washington in Seattle. There, she studied the molecular correlates of testosterone and behavior in White-crowned Sparrows. She then was a Chapman Postdoctoral Fellow at the American Museum of Natural History in New York City, where she studied the speciation and distribution of lories and other parrots throughout the South Pacific Islands.

A discarded scientist, she returned to her roots: writing. She formerly wrote for The Guardian in the UK, and she currently writes long-form science pieces for Forbes and for the non-profit Think Tank, The Evolution Institute.

An avid lifelong birder and aviculturist, she lives with a flock of songbirds and parrots in Norway.

Browse shows that Grrl has contributed to.

Website: Read her blogs at Forbes.com (click Continue to site)See more of GrrlScientist's work at The Guardian