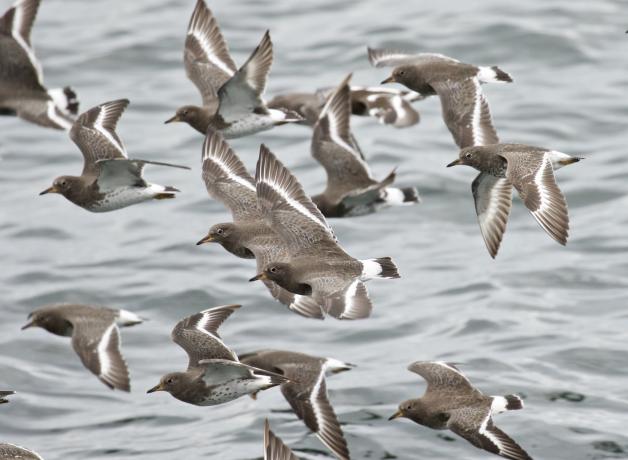 Nick Bayard - Executive Director
Nick (he/him) first became enamored with birds 17 years ago during a year-long environmental education residency at the Teton Science Schools in Wyoming. He went on to join Peace Corps Paraguay as a Volunteer in the... read more >>

Jessica Rugh Frantz - Director of Development
Jessica brings a love of the natural world and a passion for data-driven decision making. Prior to joining BirdNote, Frantz worked as the Director of Membership and Operations for the Public Radio Program Directors Association (PRPD) ... read more >>

Mark Bramhill - Producer
Mark Bramhill is an audio producer for BirdNote and has been part of the flock since 2018. Mark works at all levels of production, whether it’s writing or editing scripts for BirdNote Daily, leading longform series like Bring Birds Back, reporting original stories, or mixing in a DAW... read more >>

Conor Gearin - Managing Producer
Conor Gearin is a writer, editor and digital media producer from St. Louis living in Rhode Island. His work has appeared in The Best American Science and Nature Writing 2019, The Atlantic, UnDark, The Millions, The New Territory, New Scientist and... read more >

John Kessler - Senior Producer
John was musical director of Public Radio International’s Mountain Stage radio show for 14 years. After years as a traveling bass-player, John settled in the Shoreline neighborhood of Seattle with his wife, a cat, and a big black dog ... read more >>

Katie Meyer - IT & Web Manager
Katie Meyer is a Washingtonian. She has worked with Seattle internet and software companies and brings a background in web design and development, production, and content creation, plus a fascination with birds and the natural world. Read more >>

Ari Daniel
Ari Daniel has always been drawn to science and the natural world. As a kid, he packed his green Wildlife Treasury box full of species cards. As a graduate student, Ari trained gray seal pups ... read more >>

Ariana Remmel
Ariana Remmel is a chemist turned journalist who is passionate about exploring the world through the lens of science and discovery. When they aren’t digging into the latest research on molecules and microbes) ... read more >>

BirdNote is grateful to the many contributors who have dedicated their time and talent to our organization. Read more >>