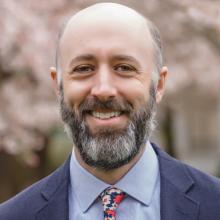 Nick Bayard (he/him) first became enamored with birds 17 years ago during a year-long environmental education residency at the Teton Science Schools in Wyoming. He went on to join Peace Corps Paraguay as a Volunteer in the Environmental Education sector, and during his service, he created and co-hosted a trilingual weekly radio show focused on environment and health topics called “Mainumby Marandu Porã,” or “The Hummingbird’s Good News.” Nick has spent the last seven years working to build antiracist policies and practices into Tacoma/Pierce County’s social service sector and into local government. Nick is thrilled and honored to serve at the helm of BirdNote, which he has adored since he first heard BirdNote programming in 2014. Nick holds a master’s degree in Public Administration in International Development from the Harvard Kennedy School of Government and a bachelor’s degree in Environmental Studies from Brown University. He lives in Tacoma, Washington with his wife, Sedia, and their three children. They all enjoy playing music, taking weekend trips in the beautiful Northwest, and watching Anna’s Hummingbirds in their back yard.