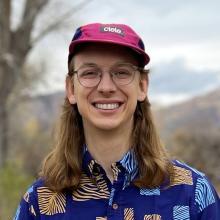 Mark Bramhill is an audio producer for BirdNote and has been part of the flock since 2018. Mark works at all levels of production, whether it’s writing or editing scripts for BirdNote Daily, leading longform series like Bring Birds Back, reporting original stories, or mixing in a DAW.

Mark is the creator of the podcasts Enthusiast! and Welcome to Macintosh. He’s an alum of the Transom Story Workshop and the recipient of the 2018 Miller Audio Prize Runner-Up in Documentary. His work has aired on podcasts including 99% Invisible, Twenty Thousand Hertz, and UnFictional. He is also the creator of the yoga emoji 🧘‍♀️

Originally from Tucson, Arizona, Mark currently lives in Oxford, Mississippi. He spends his free time playing the banjo, tinkering with computers, collecting aloha shirts, and taking his cat Pigeon on walks. His favorite bird is the American Woodcock.

Browse shows that Mark has contributed to.

Website: Check out Mark's podcast, Welcome to MacintoshMore about the 2018 Audio Miller Prize in DocumentaryListen to The Diva Sheep (Director's Cut)Hear Mark's quest to create the yoga emoji